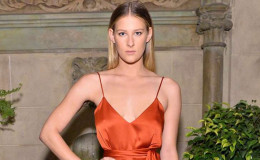 Popular American director and producer Steven Spielberg’s daughter Destry Allyn Spielberg has started her modeling career at the age of nineteen. She has recently signed a contract with DT model Management.

Popular American director and producer Steven Spielberg’s daughter Destry Allyn Spielberg has started her modeling career at the age of nineteen. She has recently signed a contract with DT model Management.

Eventually, she is on her way to becoming a popular face in photo shoots and ad campaigns. We must say she has a similar charm and talent just like her legendary director father and mother Kate Capshaw who is also a popular American actress.

Destry is one of the star kids of Hollywood with immensely popular parents. Her dad Steven is undoubtedly one of the most talented and extraordinary directors and her mom is also a popular actress.

Unlike her sister Sasha who has been to acting she has chosen another path to modeling. Even though she is just nineteen she seemed to very talented and focused towards her career.

Well, looking at Steven and Kate’s dedication and passion towards their work we are not surprised by the similar behavior of their child.

The 19-year-old upcoming model has recently signed a contract with DT Model Management. She has already finished her first shoot where she posed in the hottest trends including Coca-Cola T-shirt and sneakers.

coke cans are in, am i right?

Excited Destry has shared several pictures of her first photo shoot where she has posed seductively wearing a white Knit mini dress and a high ponytail with a complimenting makeup. She shared the photo with a caption “ponytail on fleek".

Furthermore, her third picture showing the sporting messy locks with a satin jacket was even more seductive and gorgeous.

We must say she is very natural in front of camera and Destry definitely has a great future ahead.

According to tooFab, one of the representatives of the agency told, “Destry joins our high-end women’s board with top girls Dylan Penn, Ireland Baldwin, Malaika Firth & Lydia Hearst. She’s in good hands!”

Married life of the adorable couple Steven and Kate Spielberg

The oscar-winning director first met his future wife in 1984 while shooting ‘Indiana Jones and the Temple of Doom’ and started dating. It was love at first sight for both of them.

However, he was married to Amy Irving at that time which is why they remain silent regarding their relationship.

Eventually, they got married on 12 October 1991 and Kate even converted to Judaism to marry the love of her life.

Likewise, the pair has been blessed with seven children altogether among which two of them are adopted, another two from their previous relationship and three are their biological children.

It has been nearly Twenty-five years since the duo got hitched and even today they look so much in love with each other.

Both the couple does not fail to show their affection for each other. Whenever we see them together it feels like true love does exists they are still so much passionate about each other.