Eddie Murphy Divorced with Nicole Mitchell Murphy in 2006.Know about his Children. 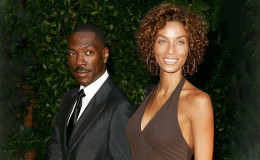 Edward Regan "Eddie" Murphy (born April 3, 1961) is an American comedian, actor, writer, singer, and producer.He was a regular cast member on Saturday Night Live from 1980 to 1984.

The popular American comedian, Eddie Murphy has been married five times and has a total of nine kids with five different wives. Well, Eddie is quite popular among women!!

Among the fives, the Golden Globe Award-nominated actor Eddie had the longest relationship with his ex-wife Nicole Mitchell (Murphy).

Sharing such precious moments of each other's lives, the couple, however, failed to work out their marriage and got divorced in 2006.

Eddie first encountered beautiful Nicole at an NAACP Image Awards show and fell in love with her instantly. The duo started a romantic relationship since 1988 and after two years of togetherness, they decided to tie knots and make it official.

So they married organizing a grand ceremony at the Grand Ballroom of The Plaza Hotel in New York City.

Their marriage, however, could not last that long as the duo decided to part ways after more than 12 years of relationship together.

According to MarriageAbout.com, their marriage started to crumble due to major personal differences which were not revealed out and open to the media.

Mitchell filed for divorce in August 2005 stating that they had "irreconcilable differences" that is beyond repair. One year later, their divorce was confirmed and they parted ways on April 17, 2006.

The Hollywood Exes star Murphy has recently revealed that she is still in good terms with her ex-husband Eddie.

It's rare for two people to remain "friends" after such an emotional split, but not for Eddie and Nicole.

On an interview with Radar Online, Nicole confessed that Eddie has remained good friends even after their divorce. She said:

“Eddie and I are friends; he’s my babies’ daddy so we speak to each other and have a great relationship and I think that’s important when you have children involved. We can be in the same room and hang out, it’s all good!”

The kids as for now reside with their mother in New York. After the divorce, both Nicole and Eddie have moved on with their lives and there are no personal disputes as such between them.

The duo couple has joint custody for their five adorable kids who have grown up pretty well to become a beautiful young woman and a fashionista, just like their mom.

Well, to conclude, the ex-couple are doing pretty well with their lives and raising their adorable kids in the best way possible. We hope to see the everlasting harmony and friendship of this couple.

As of now, Eddie is happily dating girlfriend Paige Butcher since 2012 and the couple also has a daughter together named Izzy. They are in a relationship for about five years and seems like they might get married very soon.

My heart's hurting so much, I want her home already. Another 3 weeks to wait?? #daughter #love #kiss #myeverything #whitagram #babygirl #kisses #princess #minniemouse

On the other hand, Nicole is also linked with several men since her divorce. Both of them are happy in their respective life and we wish them to be happy forever.