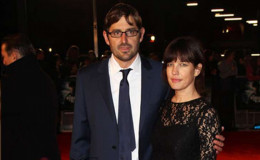 Popular British filmmaker and broadcaster Louis Theroux is living a blissful married life with his wife TV director Nancy Strang. The couple got married in 2012 after dating for several years. They have three children together and currently reside in Harlesden, London.

Prior to Nancy, Louis was in a relationship with Susanna Kleeman. However, the two could not get along and got a divorce later on. They do not have any child together and rumors stated that their marriage was just a legal formality but nothing more than that.

Louis Theroux and Susanna Kleeman: How The Couple Separated?

Louis and Susanna tied the knot in 1998 in a private way and got a divorce in 2002. Two of them do not have a child together and they were married for a short period of time.

Later on, in an interview, Louis said,

“She was having trouble finding work… legally. So we got married to make it easier for her. We never really considered ourselves married in the full sense- there were no wedding photos or anything like that it was really a marriage of convenience.”

Well, whatever was the reason the fact is they are no longer together and both of them have moved on in their respective lives.

Louis met his future wife Nancy for the first time in one of the events where two of them really got along with each other.

Moreover, the two started dating and later on in 2012 he got hitched with his longtime girlfriend. After the wedding, he went to the pub to celebrate his happiest day.

The duo has three sons together; Albert, 10, Frederick, 8, and Walter, 18 months old. Among which two of them (Albert and Frederick) were born before marriage.

Apparently, two of them seem very happy together with no rumors of a divorce. They are a very private person which might be the reason that they have made very difficult for us to know more about their personal life.

However, we can surely assume that they are living a blissful and beautiful family life, We wish them to remain as it is for the rest of their life.

Louis started his career as a journalist but was always interested in writing. He was surely influenced by his father Paul Theroux and brother Marcel Theroux who are talented novel writers.

Eventually, he began working on filmmaking and made the series titled ‘Louis Theroux’s Weird Weekends’. While describing the purpose of the series he said:

“Setting out to discover the genuinely odd in the most ordinary setting. To me it’s almost a privilege to be welcomed into these communities and to shine a light on them and, maybe, through my enthusiasm, to get people to reveal more of themselves than they have intended.”

He further added, “The show is laughing at me, adrift in their world, as much as at them. I don’t have to play up that stuff. I’m not a matinee idol disguised as a nerd.”

Similarly, some of his best works are ‘When Louis Met..’ and BBC Two Specials. One of the episodes of ‘When Louis Met’ was voted one of the top documentaries of all time when entertainer Jimmy Savile was a guest.