Former NBC reporter Jane Skinner and Husband Roger Goodell's family life. Do they have any children? 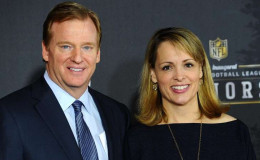 Former Fox news anchor Jane Skinner is living a blissful life with husband Roger Goodell and twin daughters. The duo has been together for 19 years with love and affection giving a perfect definition of relationship goals.

The couple has been together since very long time.They married on 25th October 1997 and after four years of getting hitched, the couple decided to make a family of their own.

Jane currently works as a housewife and takes care of her household and family, whereas her spouse works to feed the Goodell family.

The couple is away from divorce issues

The Goodell couple is the source of inspiration for all the couples out there. They are in a marital relationship for nineteen years and are still working on it with the same love and affection.

People say love disappears with marriage. Is it true?? Well, in the case of this duo, Not Really!

Their dedication and love for each other have turned the heads of many. This is the reason they are away from divorce news and rumors.

The former anchor finds herself lucky enough to find such a loving family, especially her daughters. Her twins are no more kids now.

The 15-year-old teens help their mom in cooking and household works.  Lucky, Jane, isn't she?

The mother of two is equally attached to her daughters. She started working on Fox News channel in 1998, just a year after her marriage.

Eventually, she resigned from the show 'Happening Now' in 2010 just to look after her family.

When Skinner left FOX in 2010 she said, "My life in the 12 years I have been here has changed significantly in wonderful ways and they've created a lot of new responsibilities."

She further added,"I added a husband (Goodell) who has in the last couple of years become the NFL commissioner and has a job even busier than mine. I have twin daughters, so to do justice to this new life I've decided to take a break from the business."

Skinner talked about how she tackled with family and professional life when her children were infants. She gave all the credits to her babysitter who would look after her daughters when Jane was busy.

Jane feels that her children need more attention when they are teenagers. She adds that children must be given enough freedom to help them choose the right stream of life.

The mother of two is currently serving as an advocate for women's equality. In 2007, she was awarded 'Woman of the Month' by Mid Life Bachelor.

Jane is a woman of true Family Spirit who has been able to keep up with husband and family since that long. She gave first priority to a family rather than career and money.