Home Article Garcelle Beauvais divorced her Husband Mike Nilon in 2011 After He Cheated On Her. Is She Dating A Secret Boyfriend?

Garcelle Beauvais divorced her Husband Mike Nilon in 2011 After He Cheated On Her. Is She Dating A Secret Boyfriend? 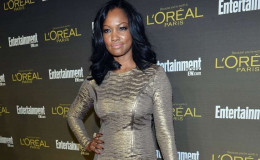 Garcelle Beauvais divorced her Husband Mike Nilon in 2011 After He Cheated On Her. She Previously married producer Daniel Saunder in 1991. She's dating a shoe designer. Find out more about her career and net worth.

The Haitian-born American actress disappeared from the dating scene after her two failed marriages. Her thousands of followers would want to know if she's open to dating or currently dating anyone as we speak?

Her marriage life never sparkled the way she had imagined. She first gained attention in the mid-1990s when she starred in Aaron Spelling soap opera Models Inc. 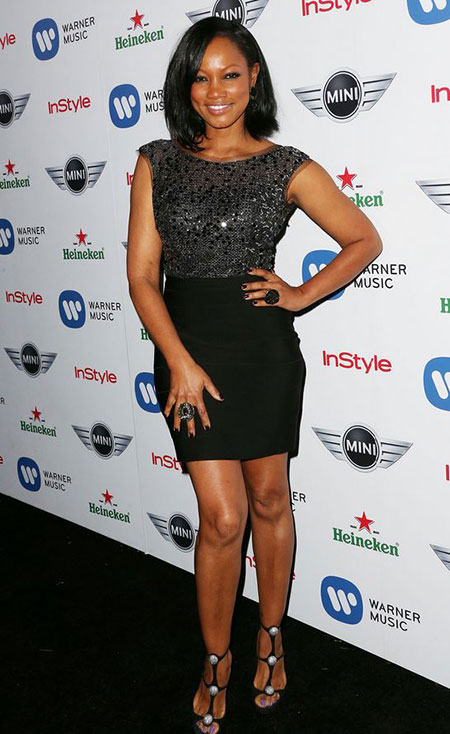 Garcelle is currently not single and dating anyone, Source: Celebrity Net Worth

After her second divorce in 2010, she wasn't ready for any other relationship so she went low-key for a while.

Then in October, she stepped out with her twin boys Jaid and Jax at the premiere of tv series Flight alongside a handsome hunk.

The divorcee revealed about her date at the premier, Ron Donovan, a shoe designer who happened to design Garcelle's shoes as well.

When asked, if she's now comfortable dating anyone new, she stated,

"It's been a while for me and I feel like now is a good time to play a little bit. He's a shoe designer. He designed my shoes!"

Ever since the premier night, she and Ron were never spotted together and looks like it was a really a fun date for her. Currently, the 50-years-old actress is not dating anyone but she's definitely enjoying her life with three children.

She lives with her two twins and her son from first marriage, Oliver aka Jayson Rose. All three of her children are a doing good in their respective field.

Her elder son is a rapper, whereas her twins are still studying in junior hight school. Looks like the actress isn't willing to date anyone as of yet.

This time she'll be extra careful as no one wants to repeat the same mistake twice of choosing a wrong partner.

Before getting in the acting world, she started her career as a Fashion model. During her long career, she dated various celebs but converted the short term fling into marriage only twice.

Garcelle with her first husband and their son Oliver, Source: Getty Images

But she couldn't get an ideal husband as both of her marriage ended in a divorce. During her early modeling days, she met TV producer Daniel Saunders in New York City.

It was a love at first sight and the pair hit it off instantly. Their chemistry was great and the pair tied the knot in 1991 after dating for a mere two months.

They welcomed their first and only child, Oliver, on February 22, 1991. The marriage lasted for 9-years until they called it quits due to irreconcilable differences. 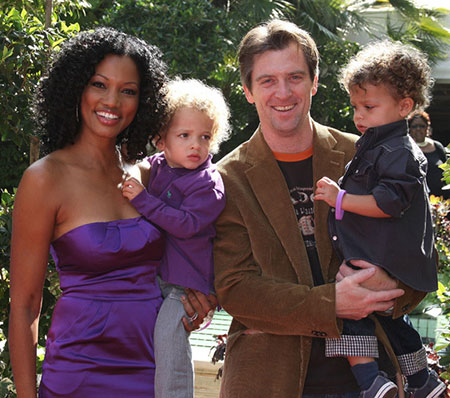 Garcelle divorced her cheating husband Mike Nilon in 2011, In the picture, the couple with their twin son, Jaid and Jax, Source: Huffington Post

But in 2010, Garcelle's blissful marriage took an ugly turn when she came across her husband's cheating. Her husband was cheating on her for the last five years.

When asked about how she find out his cheating, she recalled,

“I forgot my phone at home. I said, ‘Hey, can I use your phone to call your mom?’ So, I went to go make the call and I saw, ‘I love you’ [on the phone], I looked again, and I said, ‘What’s this?’ That’s pretty much how everything changed.”

And to show the whole world about her husband's charade, she forwarded an angry mail to all of his colleagues and wrote,

“I found out today that MY husband of almost 9 yrs has been having an affair for 5 yrs with some slut in Chicago. I am devastated!!! And I have been duped!! Our boys don’t deserve this!”

The pair separated for good after their divorce finalized in 2011. The custody of their two boys went to Garcelle.

Her mother was a nurse, Marie-Claire Beauvais, and father a lawyer, Axel Jean-Pierre.

After her parent divorce, she moved to the United States along with her mother and six siblings.

Moved to New York to pursue her modeling career.

Worked as models for companies like Ford Models, Calvin Klein, and Clairol.

Famous for her role in the TV series including, The Jamie Foxx Show, NYPD Blue, and White House Down.

Her net worth is around 6 million dollars.

For all the latest celeb gossip from the world, make sure to follow us on-