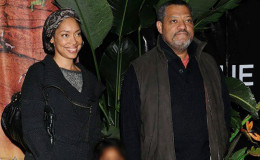 Gina and Laurence has been now married for 14 years. Both of them are superstars of Hollywood yet their personal life remains unfazed. Love is in the air

Gina Torres is a Cuban American actress best known for her role as Jessica Pearson on USA Network tv series Suits. She has also done many television series such as Hercules: The Legendary Journeys, Xena: Warrior Princess, 24 and The Shield. Gina is married to the famous Hollywood actor Laurence Fishburne. The couple married each other in 2002 and they both are still so much in love.

Gina was born in New York City, New York, the United States to a close-knit Cuban-American family. Gina's father and mother both were of Cuban descent. Her father was a typesetter for La Prensa and The New York Daily News. She attended Fiorello H. LaGuardia High School of Music & Art and Performing Arts in New York City.

Gina is known worldwide for her witty and intellectual roles she plays in TV series such as SUITS. In September 2016, Gina's contract was finished and she quitted her role in SUITS. The news came in as a heartbreak as many of her fans does not want her to leave the series.

Engagement and Marriage with Laurence Fishburne

Gina and Laurence met each other and got engaged in February 2001, and married on September 22, 2002, at The Cloister museum in New York City. The couple lives in Los Angeles, California.

Blessed with a baby

In 2007, it was announced that Gina and Laurence are expecting a baby. Gina then gave birth to their daughter, Delilah Fishburne, born in June 2007.

Gina and Laurence were are also taking care of Laurence's children from his previous marriage, Langston and Montana. Laurence does not talk to her daughter Montana anymore after she starred in a pornography video.

A wife and a Mommy first then the rest

On her interview with Hello Magazine, she said that she plays a shrewd and strict role as Jessica Pearson in SUITS, but once she reaches home she is a mommy and a wife. She said "I go home and I'm a mommy and wife."

When asked if Laurence ever plays a role in SUITS, she laughingly said that she do not know if Laurence would ever take part in the series, but she gave implications that maybe he can join the series after all.

Gina is very happy with her marriage and the couple is enjoying life with their children and it seems they will for many years to come.