Home Article Shalom Yeroushalmi Is Heading Toward A Divorce From Golnesa Gharachedaghi ; Reason For Their Divorce And Her Affair Details.

Shalom Yeroushalmi Is Heading Toward A Divorce From Golnesa Gharachedaghi ; Reason For Their Divorce And Her Affair Details. 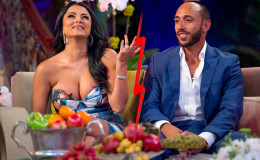 Golnesa Gharachedaghi is moving forward with her divorce with her on-again and off-again partner Shalom Yeruoshalmi. Gharachedaghi filed divorce against her less than a year husband in last May.

Viewers have witnessed the personal and professional life of Iranian American friends living in Beverly Hills including entrepreneur Golnesa Gharachedaghi is an American reality show on Bravo, Shahs of Sunset since its first season in 2012.

Gharachedaghi who was married to Shalom Yeroushalmi filed for divorce against her less than a year husband in May 2017, and the legal battle is still in process. Most likely viewers could watch their divorce in the upcoming season.

Shahs of Sunset star Golnesa Gharachedaghi headed for a divorce with her on-again and off-again partner Shalom Yeroushalmi.

According to Page Six, Gharachedaghi filed divorce against her less than a year husband last May. While the divorce process was in process, Gharachedaghi and Yeroushalmi both failed to appear in a court hearing early this year. 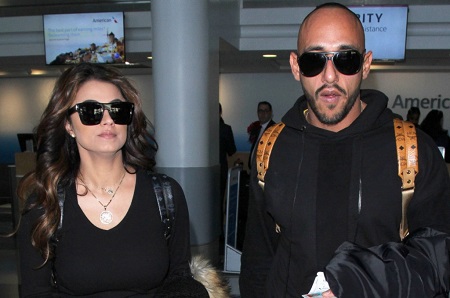 “The divorce is moving forward and they’re trying to do it amicably and get on the same page,” “She’s pretty dead set on making the divorce official soon.”

“It’s been a tennis match, It’s going back and forth … they’re both very passionate people.”

Back in fall 2017, there was also a rumor of the pair reconciling as E-News claimed the couple wants to give their relationship another shot.

The source revealed that:

"They are working things out and are back together since a month or so now,"

"They are not living together yet and have not discussed what will happen with their divorce case but right now things are going well and they are giving it another chance,"

But, the divorce was not the only great thing that has happened in Golnesa's life since then as she also became a mother after giving birth to her son, Elijah Javad in April 2021. Golnesa welcomed her son via IVF using a sperm donor.

As per the report, the reality star requested a Los Angeles court to issue a mandate "forcing him to keep a distance of at least 50 yards away from her - and her two cats-Romeo and Malaika".

In February, Yeroushalmi impersonated a security guard "when he dissuaded a food deliveryman from entering GG's home".

As per TMZ, "GG wants the court to enforce the distance between Yerushalmi and she and her cats Romeo and Malaika; as well as ban him from speaking about her and her relatives both to media outlets, as well as on social media".

The court has not made their decision yet.

The couple started dating in September 2016 and got engaged in December of the same year as Yeroushalmi proposed to Gharachedaghi in Times Square. The 36-year-old reality star took to Instagram to announce the big news flashing off a stunning diamond engagement ring on her finger writing:

Gharachedaghi, however, has removed the post from her Instagram by now. After a month, the couple got married secretly in an intimate wedding ceremony at Albertson Wedding Chapel in Los Angeles on 25 January 2017. 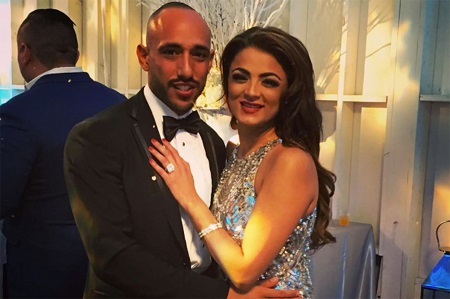 Talking to PEOPLE, Gharachedagh revealed that she knew that her marriage would not last long just after two days of the wedding. She said:

“He wanted a wife immediately, in that moment of ‘I Do’s,'”

"He wanted her to “cater to him as my husband and get ready for getting pregnant and cooking and cleaning and taking care of my man. I’m typically more of the man in a relationship, so I will never do that, let alone put a ring on my finger for you and then start doing that. It’s not going to happen for me.”

Interestingly, Gharachedaghi's prediction turned out to be true as the couple separated in March 2017 and the legal battle is still in process as Gharachedagh filed for divorce last May.

Golnesa Gharachedaghi: Past Relationships and History

Prior to Yeroushalmi, Gharachedaghi was in a romantic relationship with her Shahs of Sunset co-star Omid Kalantari.

Gharachedaghi and Kalantari first met at L.A. via their mutual friend and soon after their first meeting Gharachedaghi fell in love with his personality. 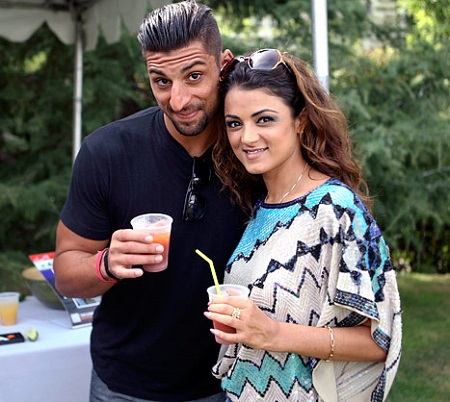 Golnesa Gharachedaghi was engaged to Omid Kalantari. Source: US Weekly

The couple, however, remained friends for years and started dating in 2011. The couple also got engaged in December 2012. But their engagement didn't last long as they called it quits the following month.