Home Article Is Actress Amy Ruffle Dating? Find out who is her boyfriend?

Is Actress Amy Ruffle Dating? Find out who is her boyfriend? 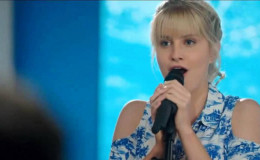 Australian Amy is dating another Australian Actor Lincoln Younes. Both of them are very happy in their relationship. They look like a couple whose match was made in heaven.

Amy Ruffle is a popular Australian actress, singer, and dancer. She is famous for her role in Australian Television series called 'Mako Mermaids' where she played the role of Sirena. She is currently in a relationship with Australian actor Lincoln Younes.

Amy was born in Victoria, Australia on 25th of February, 1992. Prior to joining television series, Amy worked in musical theatres. From her teenage days, Amy was into acting. She participated in various musicals and theatre dramas all across Australia.

Did Amy dated anyone before

Amy was in relationship with Edward Laubert in 2012. There is not much information regarding their relationship.

Lincoln is famous for his role as Casey Braxton in the long running TV series called Home and Away. One the recent premier of the movie The Equalizer, Lincoln was spotted with his girlfriend, Amy.

The couple were looking so cute together. He hit the red carpet with his girlfriend, and putting on a display of PDA with Amy.

Enjoying life as a couple

Both Amy and Lincoln are enjoying life as a couple. They go to various events together, they go to different places together. They are usually uploading their pictures together in their social media accounts. It really shows how happy the couples are.

Lincoln and Amy are not afraid to show their affection to each other as they cuddle and kiss each other while posing for the camera.

On an interview Lincoln said that his buddy from the TV series Home and away Dan Ewing helped in dating Amy. Dan plays brother of Lincoln in the TV series Home and Away. That's the reason Lincoln was able to date Amy. He stated "I wouldn't say good tips, I'd say interesting - but that's worked out all right."

He also said that "She is just the most beautiful and genuine person I have ever met, that's probably what attracted me to her."

The couple are very much in love with each other and it seems in the near future we won't be hearing from anyone of them about their breakup or split.