Home Article Is Television Personality Adam Richman dating someone? Know about his girlfriend and Relationship

Is Television Personality Adam Richman dating someone? Know about his girlfriend and Relationship 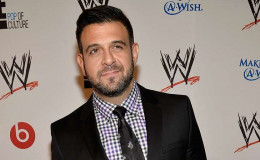 An American Actor and TV personality Adam Richman have faced lots of health problem regarding his weight, taking on the biggest and worst food challenges around all the heavy consumptions. Beside that he is a successful person with his profession but his personal life is still under the shadow.

An American Actor and TV personality Adam Richman have faced lots of health problems regarding his weight, taking on the most significant and worst food challenges around all the heavy consumptions.  Besides that, he is a successful person in his profession, but his personal life is still under the shadow.

When it comes to food, perhaps there is no man better than Adam who set the record-breaking size and spices of Food all around the country. But what about his personal life? Is he dating someone? Does he have a girlfriend? Let us find out.

Is Adam Richman In A Relationship? Who Is He Dating?

Adam Richman is not married and has no records of having a girlfriend in the past. However, currently, it seems like he found someone.

In the year 2015, he appeared as a Judge for the 2015 BBQ champ show alongside beautiful British pop singer Myleene Klass.

They looked so comfortable and happy working with each other. Their closeness was clearly visible, and slowly people began talking about their relationship.

They were spotted together holding each other’s hands as they leave TV Station where they arrived to give a joint interview about their upcoming show.

Myleene Klass and Adam Richman holding hands on the street of London sparkling the dating rumors.

Similarly, Myleene also mentioned that people often asked her about being in a relationship with Adam. While asking her a question regarding the relationship, she answered yes, and I’ve been having a great time.

She seems to be enjoying her Life, but when hinted that even Adam was single she replied saying;

’Everyone is trying to set me UP with Adam’ Don’t you start’.

Regarding Adam, she has some different views. While talking about him, she said,

"Working with him is really fun. He is so intelligent and always spoiling me with gifts."

Recently, fans were surprised to see him as he seemed so much thinner. His fans noticed the huge weight Loss when returned to TV after his show ‘Man VS Food’ that featured from 2008-2012.

All this happened as he followed the strict diet to achieve his desired weight and finally did it.

Adam Richman before and after the weight loss | Source; Natural Juice Junkie

He was facing a health problem that bothered him. He embarked on a journey where he lost almost 70 Ponds of weight. His dietary plan focused on grain and Light Food. For almost three months, he cut back Peanut and butter from his regular diet.

With all this change his career has flourished even better in 2016. He has appeared in various shows including ‘Secret Eats with Adam Richman’ and 'Kitchen.'