Home Article Is Alan Smith Gay? He divorced his wife after four months of marriage? Does he have any children?

Is Alan Smith Gay? He divorced his wife after four months of marriage? Does he have any children? 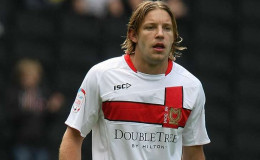 Popular English footballer Alan Smith is undoubtedly one of the dashing and handsome players of all time. No wonder that girls are crazy for him but rumors also stated that he might be gay.

Popular English footballer Alan Smith is undoubtedly one of the dashing and handsome players of all time. No wonder that girls are crazy for him but rumors also stated that he might be gay. Although he has girlfriends in past the relationship never ended well.

Alan also got married to dancer wife Kristina Macmillan. However, just after the four months of their wedding, the couple got a divorce which might also be the reason behind people taking about his sexuality. He also do not have any children.

He currently plays for Notts Country has also represented the ‘English national football team’. He was also played for ‘Manchester United’ as a midfielder until he got a transfer to Newcastle United.

Ex-England player Alan has recently broken up with his partner just after four months of their marriage and this news has led people thinking about his sexuality.

Even though he has been in a relationship with many girls in past none of that relation has worked out but that cannot be put as the reason for him being gay. Isn’t girls?

However, this can also be just a rumor as Alan has never spoken about this. Well, he definitely knows how to attract and impress women otherwise, he could not have been able to have that many girlfriends.

So, be happy girls this handsome footballer might not be gay after all and it must be just another rumor.

Former Manchester United player met his future wife Kristina who has appeared in West End Shows like ‘Grease’ and ‘Mamma Mia’ in the year 2007 when she took part in a photo shoot with then England Football Team.

The duo remained friends for years before dating and becoming a couple. They finally tied the knot in June 2016 at Peckforton castle with a glitzy vintage-themed ceremony.

Their wedding was even featured in a glossy magazine. According to Sunday Mirror, “It was a stunning day, everything you would expect from a celebrity wedding, and they had both been looking forward to it so much”.

However, things did not go well between the two and just after four months of marriage they decided to get a divorce.

Alan cheated on his wife

After the news of their separation came to the limelight people started speculating the truth behind the decision.

Well, it turned out Alan was the one who cheated on his partner with luxury trader Sarah Cox who is also a married woman. It must have left Kristina heartbroken as her husband was such a cheater.

She started suspecting Alan when she saw him bombarding a mystery number with 151 texts and 82 calls and he was also not wearing his wedding ring.

Kristina caught them red handed when she followed Alan’s car and was heartbroken to see him kissing Sarah in front of a restaurant. Later on, he broke up with Sarah as well.

A source confirmed Mirror, “All that pain caused to other people was for nothing. The relationship ended almost immediately afterward. It seems a terrible shame.”

‘Alan had known Kristina for eight years and their wedding was perfect. His fling with Sarah ended all of that. It’s hard to understand why he did it.”

Alan has always been a ladies’ man and was in several relationships. His first serious affair was with actress Lauren Frain with whom he dated for about five years.

Similarly, he was also with singer Amy Nuttall for some months and later on they broke up. Currently, she is living a happy life with husband Andrew Buchan.