Is CNN Journalist Gary Tuchman Married? Know about his wife and children 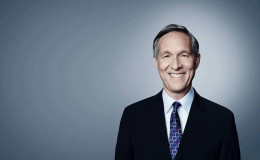 Being a tough reporter takes it toll, but thanks to your family you can leave all the stress. Gary is married to Katherine and the hitman reporter is very happy with his married life.

Gary Tuchman is an American reporter working currently in American cable news channel CNN. He is currently a staff correspondent for the show Anderson Cooper 360.

Gary Tuchman is a married man. He married Katherine M. Stark, a production manager for a trade magazine, in December 1990. The couple has also been blessed with a daughter named Lindsay Tuchman.

Gary is known as the Hitman reporter of CNN. He is a very talented and hard-working reporter who has covered several wide range stories in his career.

This may be the reason that Gary did not have any relationship with anyone before Katherine. He was always focused on his career and his wife is the only woman who was able to win his heart and marry him.

Gary is a very busy man with so many works to do and because of that reason he never involved himself to anything other than his work.

However, it looks like Gary was in need of a partner he married Katherine on December 1st, 1990. Katherine is a production manager for a trade magazine in New York.

Gary and Katherine are a Boston University graduate. It looks like that both of them met each other for the first time at the university.

The couple has been blessed with a beautiful daughter named Lindsay Tuchman. We must say Lindsay is as graceful and as talented as her father.

She is following his father's footstep as Lindsay is currently working as a reporter at WBOC-TV in Salisbury, Maryland the same station where Gary started his career. He even congratulated his daughter on Twitter.

I'm very proud of my daughter Lindsay who is making her move in a profession I am honored to share with her. https://t.co/lpXahw9K35

Gary is currently a staff correspondent on the show Anderson Cooper 360. He is also  known for his daring reporting style as Gary travels the world to cover the news. Be it in earthquake hit Haiti, devastation in Japan by Tsunami, Gary has traveled all over it and covered the best news for all of us.

Gary is having a good life right now as he no longer has to rely on himself for everything and he can always share many things with his family. Whenever he reaches home after office he is satisfied as his daughter and wife are waiting for him.