Is Journalist Bill Weir Married? Know about his Personal Life. 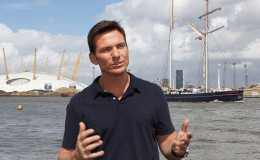 If you've watched the popular show Nightline, you would surely not miss out on one of the most entertaining and versatile television journalists of CNN, Bill Weir. The former co-host of Good Morning America is a happily married man with a beautiful family by his side.

The spontaneous and adventurous journalist is seen reporting all the happenings around the world but has left all his fans guessing about personal life. So what is Bill's life behind the screens? Is he married or does he have any children?

Without wasting any time, let's find out!

Is Journalist Bill Weir Married? Know about his Personal Life

As exclusive his news is on the TV, his personal life is hidden and detail information about his married life or affairs is not available. However, sources report that Bill is a happily married man who has been married a long time ago.

He tied knots with his long time girlfriend, Jacki back in late 90's. Sources further reports, that before marrying her, the duo dated for a long time and finally decided to be each other forever.

Bill Weir with his wife Jacki on their wedding day, Source: Weddings

Since then, the duo couple has been together and have cherished their relationship to the fullest. They are no longer just a husband and wife but a wonderful family of three with their adorable daughter Olivia.

My butt's in Botswana...but my heart and mind are with these beautiful girls. They are my fuel, my joy, my providers of relentless hugs at both ends of every long trip. I'm so lucky in so many ways. #happythankgiving

The adorable couple, Jackie, and Bill together have a beautiful daughter named Olivia who was born back in 2007. The family of three are very happy and live together in New York along with a dog named Burt.

Love my girl. #Repost @olivebranch1989 with @repostapp. ··· Congratulations to my dad! For this past year, he has worked so hard on his show "The Wonder List" and it has finally payed off. It is an amazing show and he finally gets to put it on tv! Congrats daddy!??????????

Despite his hectic work schedules and continuous traveling, he always manages to spend as much time as he can with his family. He calls himself a blessed man because he has his beautiful daughter and loving wife with him who support him no matter what.

Last year, his debut show, "The Wonder List with Bill Weir," a primetime CNN Original Series gained huge popularity due his authenticity and originality. He worked as the host and executive producer, traveling all over the world in search of unique people, places, cultures, and creatures.

Here's a video of Bill Weir on CNN showing the season finale of "The Wonder List," episodes featuring journeys to the French Alps and Florida Everglades.

The adventurer, talented reporter and a proud father, Bill has perfectly managed to balance his unpredictable career and personal life. Though he has traveled more than 50 countries worldwide, his heart always belongs to him family and home is the best place he has ever been too.

We really hope that the beautiful family stay together happily and wish all the best for their future endeavors.