Home Article Is Katie Nolan engaged? Find out about her mystery boyfriend

Is Katie Nolan engaged? Find out about her mystery boyfriend 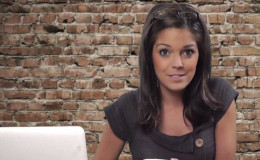 The charismatic and lively American sportscaster, Katie Nolan has gathered tons of fans because of her popular weekly series "Garbage Time with Katie Nolan".

With her enthusiastic approach and passion for sports, Katie has even earned herself an Emmy Award at such a young age. Well, she's living the great American dream but what about the dream that every girl sees once in her life. Has she found the man of her dreams? Is she engaged?

Let's find out everything you need to know about her in this section.

Is Katie Nolan Dating anyone or is she engaged?

Most of you might not believe this but the beautiful and talented host, Katie is not dating anyone and has not been engaged too.

Sources report that the 29-year-old is still single and way behind getting engaged or married.

However, her Twitter posts and Instagram feeds says an exact opposite. This contrasting and confusing tweets of her's has sure left her fans in a big puddle.

Well, we too cannot be sure she's still single because in her Instagram she posted a photo saying "We're getting married." Quite shocking isn't it?

She also posted a picture of her kissing someone in the swimming pool during the sunset. How romantic is that?

Today was a good day

Not only that, she has posted most of her photos with the same guy and now it can be confirmed that she's dating a secret guy whose name has still not been revealed.

He makes my kart race

Well, it's a matter of time and we can only hope that the duo will eventually announce the big news!

Rumors of Katie and Entourage Star Kevin flirting: Ended up on a cold war!

Last year, "Guyism's" Katie Nolan and "Entourage" star Kevin Connolly were rumored to be flirting with each other online through "Direct Messages" on Twitter.

On 25th May of 2015, Nolan publicly replied to one of the tweets of Connolly about hockey that led Connolly to send Nolan a direct message saying "Great icon picture!!!"

Nolan even him "former crush-of-my-life" and later screen shotted the picture of the DM sent by Connolly and shared on Facebook!

This created a huge controversy in the media and a huge number of commenters insulted Connolly even calling him "dogshit"!!

A few day later, Connolly responded sarcastically through his Facebook mocking everyone even Katie.

Nolan seeing this got enraged and responded to Connolly's criticisms quoting ".....and blocked on twitter. You're rather dramatic, a good actor, though, cuz you're much less funny in real life"

The online war went on for several months and it later settled on its own as now, both have been blocked by each other on their respective Twitter.

All in all, the bold and beautiful sports reporter and funny television host has finally found the special person of her life and despite the dirty controversies and cold wars, she has still managed to win hearts of her fans.

Well, we hope that we will hear the wedding bells of the couple pretty soon in the future.