Home Article Marina Squerciati is about to give birth to her first child. Said a temporary goodbye to the show Chicago P.D because of her pregnancy

Marina Squerciati is about to give birth to her first child. Said a temporary goodbye to the show Chicago P.D because of her pregnancy 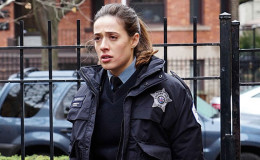 Chicago P.D. fame actress Marina Squerciati is pregnant with her first child. Often she gets linked up with her co-star Patrick John Flueger.

If you are a regular viewer of Chicago P.D. than you must be familiar with Officer Kim Burgess, the role portrayed by the beautiful actress Marina Squerciati.

Well, the actress is expecting her first child and she is due in April. We are very excited for her but also curious to know about the father.

Marina pregnant with her first child

The beautiful actress took the help of Instagram to announce her pregnancy to the world.

On February 15 just after a day of Valentine, she posted her picture on Instagram flaunting her baby bump along with the stroller.

SURPRISE! It's been hard to keep the secret ??, but since @MIMAUSA sent me the COOLEST stroller (& matching bag) in the world, I thought: what better way to tell you all the news?! (Don't be surprised to see Burgess holding a LOT of file folders in front of her stomach on #ChicagoPD.) #expecting #MIMA #babyonboard ??#mimausa

The 32-year-old beauty will welcome her first baby on this April. It seems like she tried not to reveal his pregnancy but she couldn't stop herself from sharing the good news as she surprisingly announced her pregnancy news.

APB, I am at a club. In heels. And very very pregnant. @SophiaBush #ChicagoPD

However, she hasn't revealed the father of her child. She lives a very mysterious life and no one knows she is married or not.

The father could be her husband or a boyfriend.  After a week of announcing pregnancy news, she again shared her baby bump picture with a friend and believe us it looks really cute.

When you haven't seen your friend in a while. Surprise, Jon! ??PS. CHICAGO PD's all new tonight! Who's watching? I AM! ???? #whatdoyouhearJon #pop #babybump #baby #ChicagoPD #CPDBABY #Burgess @jonseda

Marina has been linked up with her Chicago P.D. co-star Patrick John, time and often, however, the pair hasn't confirmed their relationship as they both prefer one another a very good of friends.

The duo first met on the set of Chicago P.D. in 2014. Well, we cannot blame anyone for linking them just have a look at them they look so gorgeous together.

Life's like a mechanical horse...nope, I got nothing for a #MondayMantra. Just enjoy a #Burzek throwback for you shippers out there. #besties #holdon #horserider #remembersummer #tbm #squadgoals

When you & ur very good friend...work very hard on a fan video, & u work quite hard to edit it....& before you can get the video back to said friend @marinasqu your phone/camera/storage device gets crushed by the tire of a taxi... any of y'all who may have been waiting for this. I'm really sorry. Totally My bad. Marina and I are gonna shed some tears for the video I lost and get ready to do it again. And this time we'll do it on her phone.....she's more responsible than me, shocker I know...It's on it's way. Thanks to y'all for ur patience #BURZEK #BlamePaddy #whoops #ResponsibilityIsNotMyMiddleName #OnePhoneTwoPieces

Marina is leaving Chicago P.D. because of her pregnancy

A shocking news for all the fans of Chicago P.D., as you will not be able to see your favorite character Kim Burgess in this season.

She said a temporary goodbye in Wednesday's episode, titled "last Minute Resistance", her character was ended by showing her as taking leave from a job as her sister was sexually assaulted and she needs Kim's support.

However, in real-life she is pregnant and she needs a maternity leave.

That's an out on Burgess, got to take care of my sister. And an out on Marina. Got to take maternity leave. Thank you for being amazing fans

In an interview with TV Guide when she was asked about her comeback in next season, she replied,

"Currently that's it for me. It all depends on when I give birth. I'm going to go on maternity leave until I pop. But that's it for me for right now, and then hopefully in Season 5."

At last, we want to congratulate Marina for her pregannacy and we wish she would deliver a healthy baby which brings more joy in her life.