Home Article Is Model Kendall Jenner Dating? Find out who is her boyfriend?

Is Model Kendall Jenner Dating? Find out who is her boyfriend? 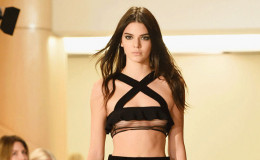 Kendall Jenner is currently the most eligible single out there. She is currently rumored to be juggling around with three men. But is she dating any one of them ?

Kendall Nicole Jenner is an American model and television personality. She is known for her role in E! reality television show, Keeping Up with the Kardashians. Kendall is also a half sister of Kim Kardashian. Kendall has always been subject to many rumors regarding any boyfriend she has or if she is dating anyone. She is currently rumored to be dating rapper A$AP Rocky, but nothing is confirmed yet.

Kendall was born in Los Angeles, California to Bruce Jenner and Kris Jenner. Kendall's middle name is named after her mother's friend Nicole Brown Simpson. She has a younger sister named Kylie Jenner. She was raised into family with a lot of siblings. Kim Kardashian, Kourtney Kardashian, Brandon Jenner, Brody Jenner, Khloe Kardashian, Rob Kardashian are all her step siblings.

Though she has been spotted numerous time with many celebrities, but still there are only rumors and no evident proof of Kendall eloping with anyone. Kendall has been rumored to be involved with famed superstars like Harry Styles, Justin Beiber, Ashton Irwin, Chris Brown, Nick Jonas and Orlando Bloom. But these are all speculation and rumors, as they all were spotted together.

Currently there is a rumor surrounding Kendall that she is dating American Rapper A$AP Rocky. They both were spotted together going out for sushi at Nobu Restaurant in Malibu, California on a Sunday Night. Rocky and Kendall were also spotted together in a club near Miami, Florida. They both went together with Kendall's sister Kylie and her boyfriend Tyga. The group was in Miami for the Annual Art Basel. They reportedly went to a medicine store together and spotted entering a hotel together.

Just after the day after her sushi date with Rocky, Kendall was spotted with 24 year old Los Angeles Lakers guard Jordan Clarkson. She was doing christmas shopping with the basketball player.

Recently Kendall did shooting for the Vogue Magazine with her rapper friend Tyler. There are many speculation regarding to which if Kendall and Tyler are into some romantic fling or they are just friends.

Kendall clearly seem to take her chances on finding the best one for her. Kendall is always in news with a new guy everyday, but this time it feels like that she can confirm her relationship with one of them. Her fan would really want to see Kendall with someone. Here's hoping if she can actually involve herself with someone.