Is Republican strategist Lisa Boothe married? Or dating someone? 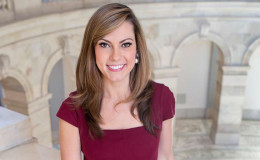 Lisa Boothe is known as the founder of High Noon Strategies, a communication firm which was established in recent years. Besides that, she also used to work as the vice- president for Black Rock Group, which is an American global investment management corporation

Lisa Boothe, who is a well-known Republican strategist, is a very private person. Is she a married woman and if not is she dating anyone? Let us find out about her affiars and boyfriends till date.

The stunning political commentator who features regularly on Fox News, Fox Business, and CNN has all the information around the world except for her personal life.

Boothe, who has touched success sky high in her political career and is also working with Fortune 500 companies, navigating crisis situations, has however chosen to remain single for now.

There have not been any sorts of gossips or rumors about her link ups and not even a hint about her past relationships. Lisa is at her 40s now, but she has not been married yet nor she have any children.

As for now, we are sure that she has got no boyfriend or husband. It might be quite right to say that she has not found the perfect man for her.

She wants to take her career to the next level and hence is not looking for inviting any kind of distractions or emotional trauma in her perfectly sorted out life.

In one of her tweets, Lisa tweeted about her date, which apparently was a dog of her brother's. So, it seems she is enjoying her single life whatsoever,

@glockster23, so cute! He's my brother's. I was on dog sitting duty for the night!

We can surely assume that she is a well brought up woman and comes from the family with higher standards. She is an alumnus of the University of Tennessee-Knoxville and has a degree in political communications as well as business.

As pf her political career, Lisa Boothe is the  Founder and President of High Noon Strategies which is boutique political communications and public affairs firm.

Prior to launching High Noon Strategies, Lisa worked as a Vice President of Political Polling and Public Affairs Research of WPA research and led the polling efforts for political campaigns across the country.

During the 2012 election, Lisa became the chief spokeswoman for the Sandy Adams for Congress and Tommy Thompson for Senate campaigns and after that, she served as the Senior Director at the Black Rock Group leading communications efforts for a Fortune 500 company, Super PACs.

Not only that, she also has the honor to be on the National Republican Congressional Committee (NRCC) team that helped take back the United States House of Representatives in 2010.