Home Article Are Rosie Jones and Joe Wicks dating each other? Find out their relationship status

Are Rosie Jones and Joe Wicks dating each other? Find out their relationship status 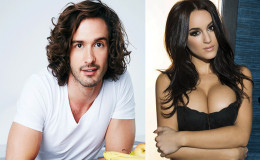 Rosie Jones is a glamour model born in Middlesex who is regularly featured in many of the UK�s top men�s magazines! Rosie Jones started modelling at 17.

The seductive and the sexiest British glamor model, Rosie Jones has already found the man of her life, breaking the hearts of millions of her male fans.

The sensual and desirable Page 3 model was spotted with the heart throb fitness coach, TV presenter and author, Joe Wicks after a fitness session two months back.

There's no doubt that the duo together makes the most amazing and perfect couple. Now, as they have publicly announced their relationship, their fans want to know more about them and the story behind this incredible union. Let's begin!

According to the sources, the eagle-eyed fans of Joe and Rosie immediately suspected that the pair were secretly dating each other when both of them posted identical holiday photos on their Instagram.

Rosie Jones posing with the same tortoise on the same bed.

The Background view is same in the both photos.

Thank you for freshening up my cut & colour before I came away @nicobouquet @clayhairsalon ...Still loving the ginge ??

Thank you for freshening up my cut & colour before I came away @nicobouquet @clayhairsalon ...Still loving the ginge ??

The pair also enjoyed a relaxing dip in the pool together!

Just arrived in Antigua ???? #Leanin15 ?? Don't forget to tune into @itv2 at 10pm tonight to see me on @celebjuiceofficial with @keithlemonforreal & @rylanclarkneal @anastaciamusic ????

When did they start dating?

The Dailymail.co.uk revealed that the 26-year-old glamourous model was secretly smitten with fitness expert Joe Wicks,30  since the last three months.

The mysterious yet romantic love scenario was unknown until the pair smartly posted a series of similar holiday memories of Richard Branson's Paradise Necker Island together on their social media page.

Later, the hottest couple also confirmed their love crime and were spotted walking together after doing a workout session on Santa Monica beach. Both of them looked camera candid and happy too!

Both of them looked camera candid and happy too!

Joe was previously dating his long time girlfriend Carolina and the pair has just broken up in May of 2016.

After four months of a split, Joe is back in the game and now he's dating the sexy British model, Rosie who is regularly featured in many of the UK’s top men’s magazines such as Nuts, Loaded, FHM and so on.

Sources told that the major reason behind the split between Joe and his girlfriend of 11 years was due to Joe's work schedule and his rising fame.  He told the sources that the break up was done mutually and quoted:

He told the sources that the break up was done mutually and quoted:

'We just grew apart. But we're still really good friends. There was no nastiness.'

Joe's DVDs and recently published book Lean in 15: 15-minute meals, has become the best-sellers and are generating more than $1.26 a month.

Also after launching his own show 'The Body Coach', Joe has grabbed a lot of attention from the viewers, mostly health concerned ladies!.

Here's a trailer of Joe's new show 'The Body Coach'.

Well, it seems like the curvaceous beauty and the well-toned muscle man are hitting it off quite well together. We wish that this dreamy couple remains together and do best in their future endeavors.