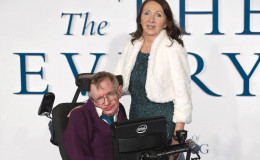 Stephen Hawking is a very much known scientist who has been paralyzed over the years. But, people might not notice much about his wives and weddings.

Stephen Hawking is not a new name for anyone because almost all of us know him as an incredible scientist. His works are very much known along with his disease known as ‘Motor Neurone disease’, which has paralyzed him over the years.

However, people might not have noticed much about his love or married life. so, today let’s discuss his personal life.

He was first married to Jane Wilde who was a friend of his sister. He has met her before his diagnosis with motor Neurone disease.

Stephen Hawking And Jane Wilde on their Wedding

Knowing each other developed a rapport between them and they eventually got engaged in October 1964, and later on they got married on 14 July 1965.

Hawking has not enveloped his feeling within himself and said that this engagement gave him something to live for. They got married even after Jane knew about his Neurone disease.

Stephen Hawking and Jane Wilde While they were young

This marriage gave them three children; An elder son, Robert born in May 1967, a daughter, Lucy, born in 1970 and their third and youngest child, Timothy, born in April 1979.

Stephen Hawking and Jane Wilde with their Children

Reason Behind Their Increasing Distance

They were living a normal life, both of them adapting with his illness until Jane met Jonathan Hellyer in 1977 when singing in a church choir.

In the process of being close to the Hawking family, Jonathan and Jane started developing romantic feelings for each other and Jane has also said that Hawking has accepted the situation stating “he would not object so long as I continued to love him.”

While dealing with the progression of illness, Hawking suffered from depression. Jane used to feel intruded by the nurses and assistants who were there almost all the time.

It was also reported that Hawking started to have a relationship with one of his nurses, Elaine Mason and he told Jane that he wants to leave her for Elaine.

Books Written By Jane About Their Relationship

She has even published a book titled “Music to Move The Stars: A Life with Stephen Hawking” which was later re-published as “Traveling to Infinity: My life with Stephen” which eventually into an award-winning movie “The Theory of Everything”. But there are some

But there are some facts about Stephen Hawking that the movie has completely ignored about.

Stephen Hawking and Jane Wilde After their Divorce

With the growing problems, they both got separated in 1990 and got divorced five years later on 1995, while Hawking married Mason, Jane got married to Jonathan Hellyer.

Jane now lives with her husband Jonathan Hellyer and they both are living happily till now.