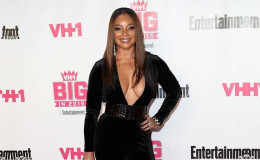 Relationship strategy of celebrities always creates a great buzz in the Tinsel town. Likewise, one of the controversial on and off couples who always gather the headlines are American actress Tamala R. Jones and Big Gipp.

The couple has again started dating and this time it looks pretty serious.

The on and off relationship of Tamala Jones and Big Gipp

Tamala Jones is now again in a relationship with Big Gipp these days. Big is popular as a member of Goodie Mob.

The couple first started an affair in 2007 but due to some personal misunderstanding, they broke up. However, the duo again reconciled in 2014.

Tamala's offensive breakup with her ex-boyfriend Teodoro Ngueme Obiang Mangue might be the reason behind her decision to maintain silence regarding her recent linkup.

The actress is also rumored to be pregnant, However, the news is all fake. Since we can see no hints from her photos recently posted on Instagram.

Tamala was in a relationship with the son of the African dictator, Teodoro since 2013 which lasted for a couple of years.

According to the news published by TMZ in March 2014, Tamala's boyfriend Teodoro allegedly had an affair with Porsha Stewart, The Real Housewives of Atlanta's star.

Tamala tweeted with a flood of anger pertaining her boyfriend's rumored girlfriend. Later, Porsha responded that she even don't know Teodoro and she has not ever dated him or any other guy at the current time.

A couple of months later, Tamala disclosed that she is no more in a relationship with Mangue.

The California-born actress once dated Nate Dogg. The duo started dating since 2003 when they met on a movie set, Head of State. The relationship lasted only for a couple of months.

In May 2006, Tamala was encountered with Big Gipp and broke up due to some personal reasons.

Tamala preferred to stay single for a long time till she met Teodoro in 2013. The couple broke up in 2014.

The model turned actress, a year later found the love of her life. As per the sources, she reunited with her former boyfriend, Big Gipp.

However, her decision to split with Gipp previously is proved wrong since she recognized him as her soulmate at the mean time.

Well, we would like to wish the actress all the luck for her career and projects regarding social services. We are heading forward to see Tamala and Big Gipp marrying soon and living a happily rest of their life.