Is The 1.66 m Tall American Martial Artist Cody Garbrandt Married? Know About His Past Affairs 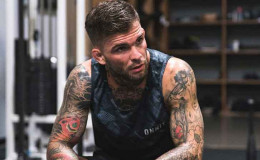 Mixed martial artist Cody Garbrandt is all set to face current bantamweight champ, T.J. Dillashaw in a rematch for the UFC Bantamweight Championship on 4th August 2018 at UFC 227. While his fans and admirers are desperately waiting for the day, his personal life is also getting much attention in media.

The most awaited moment has finally arrived!

Mixed martial artist Cody Garbrandt is all set to face current bantamweight champ, T.J. Dillashaw in a rematch for the UFC Bantamweight Championship on 4th August 2018 at UFC 227.

While his fans and admirers are desperately waiting for the day, his personal life is also getting much attention in media. He and his wife Danny Pimsanguan who married in July 2017 welcomed their first baby boy in March 2018. Let's get further details below!

Cody Garbrandt Decides to Drop Down from Bantamweight

Danny Pimpsanguan's partner, Cody Garbrandt announced on 4 April 2020 that he is planning to drop down from bantamweight after one final bantamweight stop as Kape was quick to greet him with a challenge through Twitter.

The 28-year-old said he would be fighting at bantamweight one more time prior to moving down to flyweight. Though the UFC champion has lost his past three bouts, he is hopeful to rebound in the next outing.

The UFC schedule remains in limbo as the promotion attempts tp navigate complicated waters amid the coronavirus crisis. Three events have already been postponed, so there's a chance more will follow.

Is Cody Garbrandt and wife Danny Pimsanguan still together?

Cody Garbrandt, an Ultimate Fighting Championship star and longterm girlfriend turned to spouse have crossed nearly three years of a marital relationship. The Garbrandt and his Thai Fisherwoman are blessed with a two-year-old son, Kai Fisher Garbrandt.

As of March 2020, the family of three is living a blissful life with no rumors of separation and extramarital affairs. Baby Kai doubled the happiness in their lives and their bond even stronger.

Garbrandt is now scheduled to face Raphael Assuncao as the co-main event on March 28, 2020. at UFC on ESPN 8. It's a fight that lets the understated Brazilian an opportunity to bounce back against a notable name.

The Uhrichsville, Ohio born athlete who made return On 2 March 2019 at UFC 235 after losing a fight via knockout in the first round. Regardless of the loss, he received the second Fight of the Night bonus award.

UFC Bantamweight Champion Cody Garbrandt is now a married man. The athlete and his girlfriend turned a boyfriend-girlfriend relationship into holy matrimony after dating several months.

The Ultimate Fighter star met his future wife Danny Pimsanguan during his run with the MMA promotion Pinnacle FC. Like Cody, she is also a UFC fighter in the Women's strawweight division. 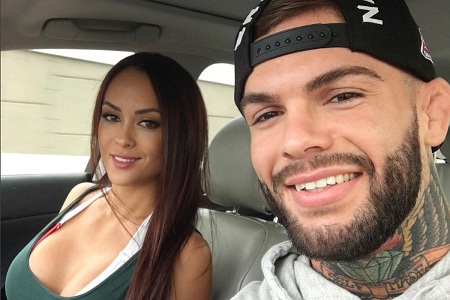 The UFC star popped the question to his girlfriend in Sedona, AZ earlier in April 2017. Danny shared her happiness on social media and started,

After years of dating, Cody and his girlfriend-turned wife tied the knot in July 2017 in a secret event.

During an interview, Garbrandt was asked about the ring on his finger and he immediately started blushing. When Karyn Bryant said that everyone's going to assume him a married man, he responded saying 'yes'.

Excited to be in La for fight week!! #andnew

It's been a year since the lovebirds started their conjugal life and happiness and bliss have its way with them. The couple who announced they were expecting their first child in October 2017 welcomed an adorable son in March 2018.

The cute boy turned 4 months old on 17 July 2018 and the proud father immediately shared his happiness via Instagram.

@kai_garbrandt just got his shots ... he wasn’t too happy about them #4monthsold

Everything is going on a perfect pace between the two. Garbrandt has got his wife's face tattooed on him wearing a tiger headdress.

We all can simply imagine how's their life going on. We wish them all the very best for a prosperous life ahead.

UFC Fighter, Garbrandt dated fellow MMA Fighter Paige Vanzant prior to marrying Danny Pimsanguan.  Paige is a social media star as well. During an interview with CNBC on August 28, 2019, VanZant said she earns more money from Instagram rather than UFC fighting.

However, back on October 30, 2019, Vanzant begged UFC to schedule a fight for her.  She earned $474,500 from her profession. Today, as Paige arranges a new contract, she wants to make money that matches not only her talent but also the earnings of her male colleagues.

During school days, he was acting in wrestling and football. In 2007, he won a state championship as a freshman.

As an amateur boxer, he compiled a 32-0 record. Before starting his professional career, he competed in many amateur fights.

He made an MMA record of 6-2 before he made his professional debut in 2012.

He signed a deal with the Ultimate Fighting Championship in 2014. He fought against Marcus Brimage in January 2015 at UFC 182.

He came at the first position in the official UFC Bantamweight rankings on 26 July 2018 and 11th in official UFC pound-for-pound rankings.

He is scheduled to fight with T.J. Dillashaw in a rematch for the UFC Bantamweight Championship on 4th August 2018 at UFC 227.

Cody Garbrandt Is Out Until 2020

Cody Garbrandt will have to wait until 2020 to get back to the Octagon as he suffered a torn tendon in training on 17 August and requires surgery.

Danny Garbrandt's husband last fought back at UFC 235 March 2019 where he was knocked out by Pedro Munhoz in the first round. It is his third loss in low.

This isn't a first injury that has sidelined Grabrandt for an extended period of time as the bantamweight fighter underweight a painful back injury in the fall of 2017. 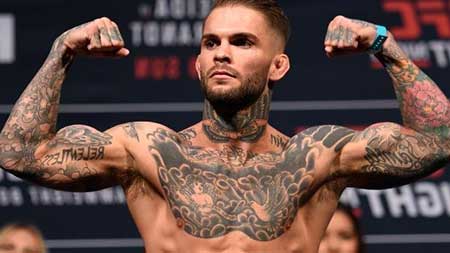