Home Article Is Tim Tebow engaged? Know about his relationship with Olivia Culpo.

Is Tim Tebow engaged? Know about his relationship with Olivia Culpo. 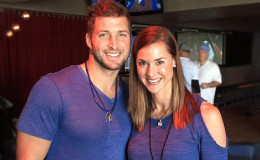 Tim Tebow is known for his faith in god and wherever he goes he always preaches about his faith. He was recently in a relationship with Olivia Culpo. Let us find out how their relationship is going.

Timothy is known for his belief in Christianity and he spreads more word about Christianity than his personal life. He was never into this dating world but recently he has been linked with the former Miss Universe Olivia Culpo. let us find out the truth.

Both Tim and Olivia were seen hanging out together with their group of friends. It was also said that they were introduced to each other by a mutual friend.

The duo reportedly met each other in a Church. How fitting of Tim's nature. It was also said that Tim was really into her.

He really liked her personality and thought of her as a goddess. A source near to Culpo said that "It’s very new, but he thinks she is a goddess. He’s very attentive, and writes her sweet notes all the time."

Even though Tim really liked Olivia, she wasn't ready for a romantic fling with anyone but eventually they started dating.

Faith came in between the couple

Tim's faith for the god is absolute. All the pictures that he posts on his social media account say it all. According to reports, Olivia broke up with Tim because of his religious belief.

The duo's relationship was short-lived as they broke up after few months of dating with each other. It was said that the reason for the breakup was Tim's vow for his virginity.

The reason may come as a shock but it was confirmed that the reason for Olivia breaking up with Tim was the lack of sex.

An insider to Culpo said that "He was sending her love letters and cute notes and professing his love for her . . . She had to break up with him because she just couldn't handle it. He still hits her up, but she just can't deal with the sex thing. He's pretty adamant about it, I guess."

The ideal girl for Tim

Tim told in an interview that he was still single and is waiting for his perfect match. He also added that they both need to have the same belief and that is what makes any relationship works.

We seriously hope that Tim may found the one he is looking for. His fan all across the country will not want to see their favorite star single for a long time.