Home Article Is Xenia Goodwin Dating? Know about her boyfriend

Is Xenia Goodwin Dating? Know about her boyfriend 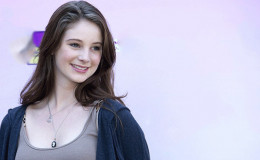 Xenia Goodwin is a 22 year old Australian Actress. Born on 7th February, 1994 in Sydney, Australia, she is famous for Dance Academy.

The most talented Australian actress and artistic dancer, Xenia Goodwin has accomplished so much at such an early age. Goodwin is best known for her outstanding role as Tara Webster on famous ABC TV series Dance Academy.

The beautiful actress is living her dream and has a long way to go in her career. As much as we know her professionally, Xenia has not revealed much information about her private life. With such beauty and grace, it's quite unreal that she's still single.

Let's find out more about the young star in this section.

Naturally talented and outstanding ballet dancer has shaken up the screens with her mindblowing performances, but it seems like there has not been anyone in her life to shook up her heart.

According to our sources, Xenia Goodwin is currently single and apparently not dating anyone.

Also, rumors of Xenia getting married to any man or anyone of her co-stars have not been heard so far.

As for now, she's busy filming her hit show Dance Academy and probably has not thought about getting into the relationship with anyone.

Rumors of Xenia and her co-actor Jordan Rodrigues seeing each other.

Recently, Xenia and her Dance Academy co-star Jordan Rodrigues were rumored to be dating each other. The pair were spotted hanging out most of the times on screen and off screen.

Despite such rumors, we could not find any evidence regarding the matter as Xenia has not posted anything about her and Jordan on any social media.

However, we did find one of her tweets where she posted saying "out with my boyfriend" but apparently, her so called boyfriend was the famous cartoon character- Garfield. How funny is that?

Just out with my new boyfriend #garfield @ Goros https://t.co/ngAnarpOkv

Xenia, 22, is currently starring as the lead role in her popular show Dance Academy. At only 16, the beauty has become an expert ballet dancer and is also studying full time at Tanya Pearson Classical Coaching Academy.

Her acting career started when she auditioned for Dance Academy and impressed all the casting director with her flawless dancing skills.

And this is the back! Soooo beautiful! Thankyou Sarah! #missjonesdance https://www.etsy.com/au/shop/MissJonesDance

On an interview with dancemagazine.com, Goodwill shared her passion for dancing since her childhood. She told the sources:

"I’ve been dancing since I was nine and I’m sixteen now, so that’s seven years. I’m primarily a ballet dancer because I grew up doing that. That’s what I had always begged my mum to do."

She further added, "I did contemporary for a really long time as well and now I’m getting a little bit more versatile and have also done flamenco, hip hop, and jazz."

You can also check out this video of the exceptional dancer Xenia who discusses her favorite dance routine from the series.

When she is not dancing or filming, Xenia spends her time in the sun, relaxing and reading a good book. She also loves playing with her dog "Missy Moo" and is often seen hanging out with her friends.