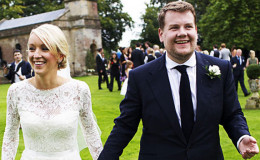 James Corden, 39, and wife Julia Carey have welcomed their third child, a baby daughter on Tuesday, 12 Dec. The Late Late Show host Corden took to his twitter to announce the little girl's birthday on Tuesday afternoon.

Congratulations are in order, for the television host, James Corden, 39, and wife Julia Carey. - they've welcomed their third child, a baby daughter.

Today we welcomed a beautiful baby daughter into the world. Both she and her mother are doing great. We can’t stop smiling. Thank you Harry for stepping in to host the show at 2 and a half hours notice! x x x

The Late Late Show also posted Corden's tweet in a photo alongside Harry Style's picture on their official Instagram. The One Direction member Styles hosted the show in the absence of Corden on Tuesday.

Big night tonight at the #LateLateShow!

Actress Julia Carey's pregnancy news hit the media after her representative broke the news in July. However, he didn't reveal the sex of the baby then.

Later in September, Corden broke his silence and disclosed they were expecting a baby girl to Mario Lopez while he appeared together with his wife on the red carpet at the 69th Primetime Emmy Awards in September. Corden told,

She’ll be arriving Christmas – we’re very excited. It will be great, lovely. We’re having a little girl, it’s going to be terrific.

I’m here with my wife and she’s five months pregnant, so it’s mostly just thinking of places that I could hide snacks. Because she’s gonna get hungry every seven minutes… It’s just I will face the wrath if she’s not fed.

The couple is already parents of two, son Max, 6, and daughter Carey, 3. They have been married for five years- they married in a lavish, star-studded ceremony on September 15, 2012.