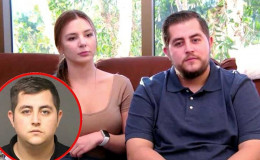 Jorge Nava is an American Television personality known for appearing in the 90 Day Fiancee; He was arrested for drug possession back in February and is now charged for two and a half year; Also, see..

90 Day Fiancee Jorge Nava has been pleaded guilty for drug charges and is bound for a two and half year of prison sentence.

90 Day Fiancee star Jorge Nava is headed for two and half prison sentence after he was charged for selling drugs.

According to the sources, he was charged for selling 293 pounds of marijuana for which he is now going to serve the following prison sentence.

The Television personality himself revealed the news during an interview published on Saturday, 8th September. But the star was expecting a long-term prison sentence as opposed to what he has got.

“With the charges against me, I was looking at around 24 years or something like that … some ridiculous number."

Jorge got lucked out after his lawyer worked out a plea agreement which then made him a class 4 felony in Arizona. He further added,

"But luckily my lawyer was able to work out a plea agreement and I got the charges dropped and I ended up pleading to a class 4 felony in Arizona.”

The incident though happened around 6-months ago when Arizona police discovered him with 293-pounds of marijuana. He was also pleaded guilty of drug trafficking once before.

But looks like Jorge is thinking otherwise whether his prison is a bit harsh. According to him, a lot of states has already legalized Marijuana and in the state of Arizona, it's actually a legal medicine.

“I just feel like the fact of it, just going to prison over the same stuff that’s legal, is just kind of crazy to me.”

In this difficult time his wife, Anfisa Arkhipchenko is supporting him. The couple got married after meeting each other through Facebook.

Well, the TV star is bound for some time off from the small screen unless of course, he devises some strategy to get out of prison before his term ends.