Home Article Are Jen Selter and Evander Kane dating each other?

Are Jen Selter and Evander Kane dating each other? 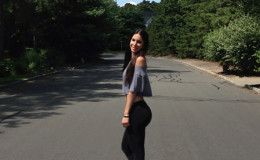 Jen Selter is the most sought out girl currently in the social media. She was recently linked with Evander Kane. Let us find out about their relationship.

Jen Selter is an American fitness guru and a social media personality. Due to her godly looks and superb physique Jen has always been able to attract many people. Everyone wants to know about her boyfriend and dating life.

Recently she was linked with Canadian professional ice hockey player Evander Kane. Are they dating each other or it is just another rumor. Let us find out the truth.

As per current rumors Jen and Evander might be dating each other. Lately, both of them has been spending a lot of time together and we must say they just look adorable.

On this tweet, both Jen and Evander replied and the reply certainly made the news all over the world.

Evander converted this tweet to a DM. The tweet was shared all over the social media by their fans.

However, it is not Evander's fault though because who does not want to get close and personal with Jen.

There’s nothing better than new activewear Will be doing another giveaway soon! @bombshellsportswear New blog post up my website- link in bio

After the tweet, there has been no news about Jen and Evander. Nobody knows if Jen has accepted Evander's request or not.

The tweet surely created a stir in Evander's life because at the time of this incident he was already in a relationship with Khloe, a social media personality.

Khloe was so upset with her boyfriend which is why she took her anger to the social media and posted her opinion about the incident.

After the Twitter drama, the couple broke up. Evander didn't react to Khloe's Instagram message to the public.

Evander is now trying to get a hot date with fitness freak Jen Selter. Although nothing has been confirmed between them we must say they surely looks amazing and hot together.