Home Article Jon Lovitz and Jessica Lowndes are dating. Are they engaged?

Jon Lovitz and Jessica Lowndes are dating. Are they engaged? 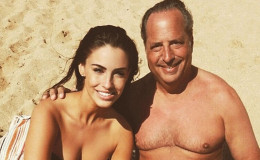 Jessica Lowndes is a Canadian actress and singer-songwriter. She is best known for her role as Adrianna Tate-Duncan on The CW teen drama series 90210.

The super-hot Canadian actress and singer, Jessica Lowndes has a new man in her life, who is more than 30 years older than her and he's no other than the famous stand-up comedian and a cast member of Saturday Night Live, Jonathan "Jon" Lovitz. It's quite unbelievable that the pair are dating since March and now even engaged to each other!! Isn't this crazy??

When media came to know about the alleged affairs, a lot of their fans reacted sarcastically telling that this entire affair is a publicity stunt and the pair are just pulling up a prank for the April's Fool. So what's REALLY cooking between the pair? Let's find out?

The former 90210 star and Saturday Night Live (SNL) comedian star announced out and open that they're dating each other since March 2016.

The pair took this in Instagram where, Jessica posted pictures of her and Jon hanging out together, showing off her ring.

His hands are wise and tell a thousand stories... #smitten #hatersgonnahate ?????? snap: realjlowndes

Their photos and videos left the audiences in a shock and most of their fans were very skeptical regarding this news.

Also, in one of his Twitter post, Jon Lovitz adorably posted about his Easter celebration. He wrote "Easter with my bunny." He even shut the mouths of many of his critics talking about their age gap, and tweeted saying 'nice jealousy!'

Eventually, as suspected, the so-called duo couple were actually NOT dating and they were just pulling up a publicity stunt! How cliche'!!

Their relationship was just a Prank!

Apparently, the whole relationship of Jon and Jessica was just a smart prank as repoted by EtOnline. This was revealed when Lowndes herself confessed on her Instagram video saying "Just because it's still late March, is it too early to say "April Fools?" and further pointer her camera to a computer screen featuring a paused clip of Lovitz in her new music video.

Not only that, both of them exclusively told ET Online about their relationship prank to promote Jessica's sexy new music video. Here's the video where they confessed about their prank.

Well, as this matter has been clarified, we now know that these pranksters are really on dating and no where near getting engaged. Jon Lovitz is definitely not the usual type of man for Jessica.

Similarly, Jon was dating actress Janice Dickinson back in 2004.