Home Article Joseline Hernandez broke up with her boyfriend Stevie J. Know about her child.

Joseline Hernandez broke up with her boyfriend Stevie J. Know about her child. 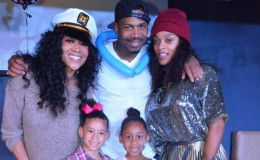 Joseline and Stevie are famous reality tv personality and it was said that they are married. But the truth is very different than that. Let us find out what exactly is going on.

Joseline Hernandez and Stevie J's love story are filled with controversies. Stevie first met Joseline in a strip club in Atlanta. The couple was said to be romantically and sexually involved with each other at the time when Stevie was already in a relationship with Mimi Faust.

However, Stevie and Joseline's relationship has been subjected to many problems recently. She is currently pregnant with Stevie's child as per rumors their relationship is facing a lot of problems. Let us find out the truth.

Although Joseline has always said that she was never married to anyone prior to her relationship with Stevie until recently when a news came regarding Joseline's marriage to a guy named Matthew Louis Tremellen on March 21, 1997.

This may come as a surprise for a lot of you but according to our sources, Joseline's real name is not Joseline Hernandez but Shenellica Juneann Bettencourt.

What's more shocking is that Joseline has even lied about her age to all of us. It was disclosed that Joseline is nearly 40 as of now. She is surely a mysterious person.

Stevie met Joseline in a strip club named Onyx Club in Atlanta. He then decided to cast her in the show named Love & Hip Hop: Atlanta. Although the couple announced that they are now married but it was revealed that

Although the couple announced that they are now married but it was revealed that they were never married to each other.

In a document that was leaked online, it was said that the couple was never married but they were involved in a sexual relationship with each other.

She even stated that she is now pregnant with Stevie's child and the child is due in January 2017. The document was signed by Joseline herself.

Current Relationship of the couple

The relationship of them is in a very bad situation right now as the couple is dragging each other to court and suing each other.

Stevie even said that Joseline needs to be taken to anger management sessions.

Stevie even asked for a psychological treatment with the court for Joseline as the war between the duo is taking a very dangerous turn.

Similarly, he also told the court that Joseline is threatening to hurt their unborn child and Stevie is now asking for the guardianship of his baby.

The couple is now surely going to be separated with each other but what is bothering everyone is who will take care of the unborn child. Will it be Stevie or Joseline? Only time will tell.