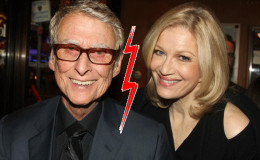 Diane Sawyer, a prominent figure in TV industry who has worked with one of the most reputed channels, ABC as the anchor of ABC News. She was also a member of the white house. Besides being successful with his career, she has a more painful personal life. she had an unthinkable heartbreak.

Diane Sawyer, a prominent figure in TV industry who has worked with one of the most reputed channels, ABC as an anchor. She was also a member of the white house.

Diane was married to Mike Nichols, Late German-American director. It is very difficult to live the life if you lose the loved once. Sadly, she has to go through the pain of losing her husband. Let us more about her personal life.

Diane Sawyer’s husband Nichols lost his life due to the heart attack at his home in Manhattan on November 19, 2014.

He was best known for his direction skill on the classic movie 'The Graduate'.

Her husband passed away at the age of 83. On the same month, she lost her mother too at the age of 94. Nichols’s death was announced by ABC’s President, James Goldston.

Sawyer and Nichols tied the knot in 1988 at Martha’s Vineyard. They were together for over 25 years. The former model and Late Grammy award winner first met in 1986 in a lounge at Charles De Gaulle Airport in Paris, France.

The couple never has children together. Nichols was the first man, she ever married but prior to that, Nichols was married for three times.

He has a daughter from his second wife, Daisy Nichols and two sons from his third wife. His son max is an actor and a film director.

The Emmy award winner, Diane made an outdoor appearance few days after her husband’s death along with her stepson Max to Utitarian church for her husband soul.

Nichols left $20M Fortune to his wife and kids

According to page six, late director Mike Nichols left his estimated $20 million net worth to his wife, Diane Sawyer, and three children.

Sawyer will inherit all her husband's property along with her step-children. Nichols left a J.F Herring Painting named ‘Horse with Groom’ for his son Max.

Diane Sawyer is in a relationship after her husband’s death

According to Page Six, Diane Sawyer is dating Bill Bradley. The pair was seen together sharing white wine and Champagne at one of the most romantic restaurants, at Molos.

Bradley is a former professional NBA star and the rumored couple was together at the time of college. Well, all we know is that if Diane is happy with her new relation and we are also happy for her.

We wish her to have all the happiness and success that she deserve.