Home Article Journalist Reena Ninan and her husband Kevin Peraino is happily married. Know about her family and children

Journalist Reena Ninan and her husband Kevin Peraino is happily married. Know about her family and children 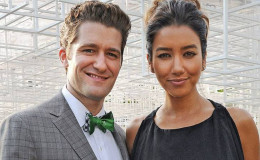 Reena Ninan anchors World News Now and America This Morning on ABC News. Previously she was a New York correspondent. Ninan joined ABC News in 2012 and covered the White House. She reports for "Good Morning America," "Nightline," and other ABC broadcasts.

A well-accomplished and versatile journalist, a caring mother and a loving wife too. This strong and powerhouse woman is none other than an expert journalist, Reena Ninan. The beautiful and sensuous Reena currently serves as the lead anchor for 'World News Now' and 'America This Morning' on ABC News.

It's obvious that a life of a journalist always comes as rush and uncertainty. We wonder how they even manage time for work and family. But today we bring you the story of an incredible couple , Reena and Kevin, who have flawlessly managed their professional life as well as personal life. Despite all the odds, the couple is now living happily and raising two beautiful children together. Let's find out more about them.

They say love sees no boundaries or religion or one's background; love simply happens and when it's true it's unconditional. Reena and Kevin are the perfect examples of true love.

Reena who was honored as “Women on the Front Lines” in the Glamour Magazine in 2011 is of Indian descent but she was born and raised in Tampa, Florida, United States of America.

Kevin, on the other hand, is an American born in Hayward, California, United States of America.

Despite some differences, their career brought them together as Kevin too was a former Newsweek reporter who has reported from all around the world including Syria, Lebanon, Libya, Yemen, Israel, Sudan, Iraq, and other countries.

The duo finally decided to get married after dating for a couple of years ago. Since then, they are having the best times of their life, living happily with two adorable children.

Reena,36, now lives with her beautiful kids and author husband who is currently working on a book about China, in New York.

Rumors or news regarding their divorce or affairs have not been heard so far, and it won't happen too, as they are happy and committed in their relationship.

With two young ones and the responsibility to raise them well, the pair will surely make their bond much stronger than ever.

The duo has been blessed with two beautiful children, a son, and a daughter. Their names are Jackson and Kate. Jackson was born on 30th December 2010 and Kate was born two years later on July.

Both Reena and her husband loves spending time with their family and despite their work and busy schedules.

Here are some of Reena’s tweets and Instagram posts of her sweet memories and times with her son Jack and daughter Kate:

My son threw his train at our tv. Anyone know how to fix a broken LCD screen?

Reena also manages time from her work to take her children on parks and recreational sites.

Seeing sunlight for the first time in 6 months! That's a happy scream. #SeeyaWinter

The adorable pair also never miss any of these's cuties birthdays and other adventures.

Also, when Reena gets time off her work, she rushes in the kitchen to try out different cuisines. She is an ambitious amateur chef.

Recently, she was on a short vacation to Nepal. She has posted some tweets and photos of her visit there

They were also seen doing Christmas Tree Hunting together and preparing for the huge celebration.

Yup. Found the right one. The tree is pretty good too. #LoveChristmas.

Well,  we really wish all the happiness for this lovely couple and their adorable children and hope they do best in their future endeavors.