Home Article Journalist Scott Pelley and Jane Boone have been married since 1983. Know about their children and family.

Journalist Scott Pelley and Jane Boone have been married since 1983. Know about their children and family. 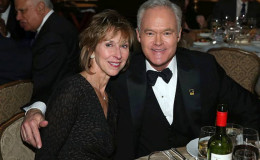 Scott Pelley is one of the experienced reporters in broadcast journalism and a legend in American News Industry. Only a few journalists have achieved such success and recognition in the news industry as Pelley has achieved in his lifetime.

Even greater than his fame, he has his precious family: a loving and enduring wife and two adorable children by his side. The man is already a winner.

So, today in this section, we will provide you all the details about the married life of Scott and his wife Jane. Buckle up! Let's begin.

Scott Pelley, who now works as the anchor and managing editor of the CBS Evening News as well as the correspondent for CBS News magazine, 60 Minutes is married to his wife Jane Boone, who is a former Channel 5 reporter.

The adorable pair first met in Dallas and fell in love with each other instantly.

After dating for some time, they finally decided to tie the knot and got married in the summer of 1983. Since then, there has been no looking back for this powerhouse couple.

They have been blessed with more than thirty-two years of happily married life and their love for each other has remained the same, even stronger than ever.

On an interview with newcanaandarienmag.com, Scott quoted:

“I don’t know how much insight Jane can give in to me, we’ve only been married twenty-six years and she’s just getting used to me.”

This clearly shows that the romance and the love between this couple are still young and vibrant.

How the perfect couple first met?

Jane and Scott first met when Jane was doing an internship on the Dallas station and at the same time Scott was doing a news report.

Jane shared her memories with Darien magazine where she quoted:

"When I was a student at Southern Methodist, my journalism professor brought in the chief of a local news station as guest speaker. This director carried in a pile of résumé tapes that hopeful news reporters had sent to the station and let the students judge them. As I watched the clips of news reports, one reporter jumped out of the rest. “Oh, definitely, that guy,” I said.

"Months later I saw “that guy” doing a news report on the Dallas station. Soon I became an intern at the station and we finally met."

She also recalls how was Scott when he was young. She explained how is spontaneous and thriving nature made her fall for him even harder. She further added:

“In the beginning, it was just very natural. He liked my friends, and you can kind of tell that way. He was very different from any of the guys I ever dated. When I met him, he was hang gliding and always taking pictures and developing them.

Jane eventually became the reporter on the rival station and when they got married, the news became headlines of Dallas Morning News: "Competitors Tie the Knot."

Who is Jane Boone?

Jane Boone is a former news reporter of Channel 5 news. She is the daughter of a surgeon and an anesthetic expert.

Eventually, she became a medical reporter and started hosting a medical talk show.

Later she commenced her own ad agency relating to medical issues and worked for a decade. When Scott became chief White House Correspondent, she became busy with her family life and started running households rather than business.

As for now, she teaches tennis in a Special Olympics class to young adults with Down's Syndrome.

Do they have any kids?

The everlasting couple has shared parenthood for two beautiful children: a son and a daughter in their lifetime. They have a handsome son named Reece Pelley and a beautiful daughter, Blair Pelley.

Well, we wish all the happiness and love for this wonderful family and hope that they do much better in their forthcoming days.