Home Article Journalist Zoraida Sambolin is a happily married woman. Know about her husband and children

Journalist Zoraida Sambolin is a happily married woman. Know about her husband and children 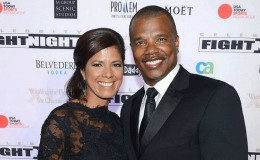 Zoraida Sambolin is a well-known personality who has worked as a co-host in Early Start along with John Berman in CNN. The Puerto Rican beauty is a happily married woman with the famous and first African-American executive vice president of White Sox Organization, Kenny Williams.

Both of them are famous celebrities and everyone wants to know the story behind this beautiful relationship and togetherness that they have maintained despite their disturbing past relations. So, without further delay, let's begin!

When both of them gave up the hope for love and relationships because of their failed marriages in the past, fate crossed their paths and they fell in love with each other. Doesn't it sound like a fairy tale story? It does indeed.

The couple eventually tied the knots and exchanged vows for togetherness till eternity on Christmas Eve of 2013. Since then, there has not been looking back for the couple and are enjoying their blissful married life.

How the couple first met?

Apparently, it was the White Sox that brought the amazing couple together on 13th Sept. 2010. Sambolin was hosting a charity event during that time for the team's manager Ozzie Guillen, under Kenny Williams.

They felt the strong connection right from the first moment they met.

On an interview with sportsdivasinc.com, Williams recalled the moment and said:

“The first conversation I had with her, I knew I needed to run fast or I’d be in trouble."

Eventually, they started dating each other and after two years of successful relationship, on Christmas Eve, 2012, Kenny Williams finally proposed  beautiful Zoraida in the most romantic way by getting down on one knee after midnight Mass at Holy Name Cathedral and asking her to marry him. William with much emotion stated:

“I was excited all day and pulled her aside after dinner and asked her in my office at home. She knows I can’t save a surprise for long. But the next day, we went to the church, kneeled before the altar and I asked again the way I had intended — she pretended to be surprised.”

Soon after that, the duo officially got married on July 3, 2014, organizing a sacred and a private ceremony to cherish their bond of togetherness.

The power-house couple, with their second shot in marriage, has not only shared their lives together but also their families. Both were previously married and later got divorced from their ex-partners.

All of them are living together in peace and harmony without any disputes or conflicts as a perfect and happy family.

The couple often posts pictures and videos of them spending quality time with each other.

Sambolin was previously married to Dr. John Hobbs and has two children from that marriage; the eldest, a son, Nico, aged 14 and the youngest, a daughter, Sofia whereas Kenny, too was married to his wife back then and has three sons from his first marriage.

Well, the couple still believes that love never comes as planned as they were not in search of love when they first met, but fate let them collide together and this match made in heaven is having the best times of their life and we hope that the happiness and love between them and their family remains the same for eternity.