Home Article Kanye West and Kim Kardashian Married in 2014. Know about their Children and Family.

Kanye West and Kim Kardashian Married in 2014. Know about their Children and Family. 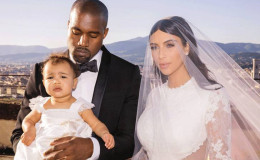 Kanye and Kim are currently the most wonderful and happy couple we could see. Both of them are very happy with each other. They are also blessed with two beautiful children.

Kanye West and Kim Kardashian are currently the hottest couple around. Kim has had many relationships with several other men prior to her meeting with rapper Kanye. She was in a relationship with music director, rapper, a professional athlete, a tv superstar and what not. At one time it seemed that Kim will never find the right one for her. But then she met rapper Kanye West and she is now stuck with him forever.

The love Kim and Kanye show for each other is just wonderful to see. Kanye also had many relationships in his past and at one time it was also rumored that Kanye is a gay when he was linked with Italian fashion designer Riccardo Tisci. But it was a hoax as he is now happily married to Kim Kardashian and have two children with her.

The couple got married on May 24, at Fort di Belvedere in Florence, Italy.

The couple was also accompanied by their daughter North as she was born one year before Kim and Kanye's marriage. The ceremony was private and only their close friends and family were invited.

Both North and Saint are probably the luckiest kids in the world as their parents show so much affection and care for them.

And on top of that, her friends and family support her to the very end.