Home Article Blissful married life of Kate Norley and her Husband John Oliver: Couple has a son: No divorce rumors

Blissful married life of Kate Norley and her Husband John Oliver: Couple has a son: No divorce rumors 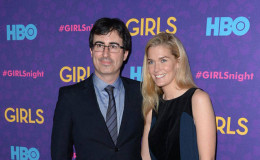 Kate Norley and her husband John Oliver is happily married since five years. They were blessed with a baby boy named as 'Hudson'.

Kate Norley is a remarkable woman, she is an Iraq War Veteran in the US Army. She is known as the wife of ‘John Oliver’ who is an English comedian and a host of HBO’s ‘Last Week Tonight John Oliver’.

Kate and John are happily married for seven years and is enjoying their blissful life. In this journey, they were blessed with a baby boy.

Oliver and Norley met at the 2008 Republican Convention in St.paul, Minnesota. He was doing a piece for ‘The Daily show’ and Norley was campaigning with ‘Vets for freedom’.

From that day, they started meeting often and fell in love. After dating for two years they finally got engaged on July 2010 in St. Thomas.

The duo changed their relationship into holy matrimony in October 2011 just a year after an engagement.

'The last week tonight' host always seems to praise his wife. In an interview with ‘Daily News', he said his wife is his hero. This is something really adorable, isn’t it?

They are honest towards each other and according to them, honesty is the most important in a relationship. They are together since five years and more are yet to come.

The couple was blessed with a baby boy named ‘Hudson’ on 12 November 2015. It was their first child.Oliver dished to vanity Fair in February 2015 that he wanted his children to “speak like him.”

He also said that he hated the idea of ‘chilling out,’ so hopefully, this little one will take up any free time Oliver might still have.

Here are the picture of Oliver and Norley’s little boy;

Kate is one of the proudest women who proved that woman can do anything. She is US Army Combat Medic and Iraq war Veteran.

At the age of 16, while riding her bike to a soccer game, she was hit by an out of control driver. She experienced severe head trauma, losing all her cognitive skills which require her to learn and write again.

After 9/11 attack Norley stepped up to sever her country and enlisted in the U.S. Army.  She said, “The Army has given me a chance to do things I never dreamed I was capable of doing.”

Her journey was not easy. She has faced many ups and down during her military career.  In 2008, she had completed her time in service and dedicated herself to advocating veterans rights.

We wish Kate Norley and John Oliver a blissful life.