Home Article Khloe Kardashian is dating boyfriend Tristan Thompson. Are they getting married/

Khloe Kardashian is dating boyfriend Tristan Thompson. Are they getting married/ 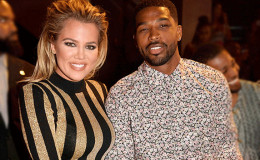 Khloe Kardashian just like her sister is known for her huge list of boyfriend. She is currently dating NBA star Tristan Thompson for 5 months now.

Khloe Alexandra Kardashian is an American television personality best known from the hit E! cable network's show Keeping Up with the Kardashians. Khloe has been involved with many men in her past life and has always been in the headlines because of her relationships.

She is currently dating NBA star Tristan Thompson and the couple recently celebrated Christmas together. Let's take a look at their relationship.

Khloe has been in a lot of relationships prior to Tristan. In 2009, Khloe was dating NBA star player Rashad McCants. But their relationship was very short as the couple broke up the same year

In an episode of Kourtney and Khloe Take Miami, Khloe claimed that Rashad cheated on her, but in an interview given to New York Post, Rashad said that they made up the whole scene just for the show.

Then again in 2009, in Khloe's sister Kourtney's birthday celebration in Mexico, Khloe was found getting cozy with an American football player, Derrick Ward.

Similarly, on August 27, 2009, after dating each other for a while Khloe and Lamar Odom, a retired professional basketball player, got married on September 27, 2009.

However, after four years of happy marriage, the couple got a divorce on December 13, 2013, due to Lamar's addiction to drugs.

The duo was spotted hanging out together and it leads to the report that they may have been dating each other.

Likewise, in 2013, Khloe was dating rapper French Montana but she later broke up with him and the reason she said was that as she has recently suffered a bad marriage and she would like to take things slow.

James Harden and Khloe met each other in rapper Kanye's birthday party and they got real close as Harden helped Khloe move on from Lamar.

It looks like Khloe has finally found the one as she is currently dating NBA star Tristan Thompson.

The couple recently celebrated Christmas together and it seems they are very happy with each other.

Maybe, this time Khloe has finally found the one and we wish them to always remain together. Only time will tell about the couple's future with each other.