Home Article Kristaps Porzingis; is the Latvian basketball player Dating someone? Know about his Girlfriend and Relationship

Kristaps Porzingis; is the Latvian basketball player Dating someone? Know about his Girlfriend and Relationship 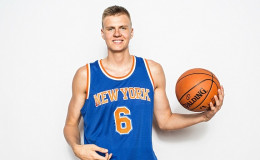 Know if the Latvian basketball player, Kristaps Porzingis is dating someone? Know about his girlfriend, affairs, and relationships in details.

The power forward player of New York Knicks, Kristaps Porzingis, is one of the most recognizable faces in the NBA. The Latvian professional basketball player, Kristaps, is known for his fierce performance in the game and has a record of more than 1000 points, 500 rebounds, 75 three-pointers and 100 blocks in the course of 2015-2016.

The popular player, however, keeps his profile low, so everyone is seeking to know about his personal affairs. Is the basketball player dating someone? Who is his girlfriend? We have the answers here!!!!

Kristaps Porzingis, Know about his girlfriend and relationship here

Kristaps surely has a huge fan base and people just love him. One might think that as he is very popular and of course very handsome he has a long list of girlfriends but in reality, he is very much single.

He has not been linked with anyone so far and seems busy with his work.

The young basketballer currently lives with his family. Maybe, he hasn't found any girl whom he can have a relationship with or he may be dating someone in secret hiding from the media.

As of now, with no dating rumors, we can assume him being single.

The trump card of New York Knicks, Kristaps is quite popular around controversies. Kristaps came in highlights with an issue with glamourous model Ines Nikic.

Porzingis, who tried to play the fame card on Instagram with a Sports Illustrated model, Ines got blew off as the model gave an unexpected response.

Kristaps Porzingis is a savage pic.twitter.com/1l3KcpzvhC

It wasn't over for Ines yet as later she tagged Kristaps on her Instagram post kissing another man with her Insta caption in Croatian translated to English “Are you sleeping peacefully Kristaps Porzingis?”

Kristaps, however, tried to act natural posting heart-eye emoji on her post but bad luck for him. The player got criticisms from the Instagram users reminding him that she was only 19. 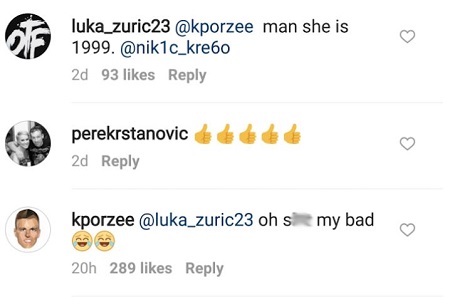 The matter was just not resolved and the news of Kristops joining his rival team LA Clippers heated the highlights but Kristops gave his explanation that his twitter account was hacked and someone posted the false information to harm his good fame.

But, as soon as his tweet was posted, Instagram beauty and Sports Illustrated stunner Abigail Ratchford also posted about being interested in Kris joining in LA Clippers.

The issue, however, was not a big rumor of Porzingis's love affair until Kristaps commented with two sets of emoji eyes which was noticed by Ratchford and replied with the same set of emoji eyes and a kiss.

Well, what a mystery !!! Kristaps has not confirmed him in any kind of relationship with Ratchford neither Ratchford has. But, what's up with all these stuff?? But without a proof, nothing can be judged. 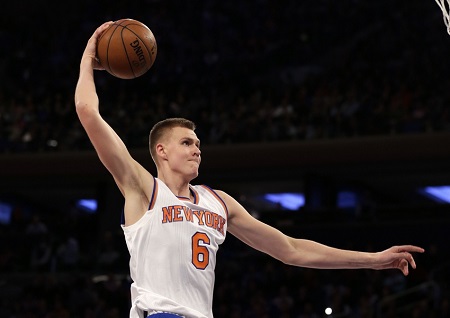