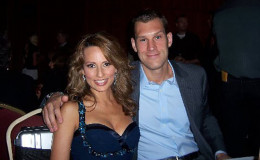 We have seen her in many advertisements and on the famous NBC's network show called Deal or No Deal. She is none other than Patricia Kara. She is now married to Noel Lamontagne and they both seem happy.

You may know her from the primetime and daytime serial on NBC's network called 'Deal or No Deal'. Having a career in the entertainment industry is not an easy job. But for Patricia Kara, it was all the matter of will, hard work, passion, and knowledge. It was like she was born for it.

Unlike her professional life, her personal life is quite a mystery to the world. As per the sources, she has been married to a former American player NoelLaMontagne. The couple seems to be living a very happy family life with no rumors of them getting a divorce. Let us find out more about the magnificent pair.

The couple first met on June 27th, 2003 in Jacksonville at a charity event and began dating soon after. Later on, they got married and decided to be with each other for eternity.

Our wedding featured in June's issue of #ChicagoBrideMagazine Just in time for our anniversary!!! #Mykonos #PlatisYialos #Beach #Greece

Noel proposed to Patricia during their trip to Italy, the romantic city of Venice on November 17, 2009. Their wedding was an extravagant affair and all of their friends and family were invited.

Limo ride to my wedding ceremony in Mykonos, Greece

A little inside out of Patricia Kara

She has received her 'Bachelors in Performance Arts' from the Columbia College in Chicago. Having selected as People Magazine's "100 Most Beautiful People" and her starring role in Trace Adkin's hit country music video "Marry for Money" has also helped her to become more famous.

Patricia believes in "Health is Wealth" principle and she has still kept the proper tab of her figure. She has also featured in fitness magazines as well like Sports Illustrated, Shape, Fitness, Women's Fitness, etc.

Showering Love to each other

The duo usually posts their pictures on their social network sites. They seem to be enjoying their married life a lot and the photos on their Instagram account shows it all.

We can surely assume that the duo is so much in love with each other and we wish them good luck in their future endeavors.