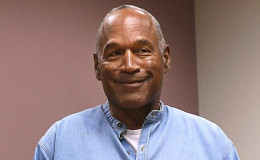 Multi-personality O.J. Simpson is currently single and enjoying a peaceful life. He was in a marital relationship with Marguerite and Nicole Brown and fathered five children (including deceased Aaren).

The man who was once popular and widely recognized as the best NFL footballer, Orenthal James "O. J." Simpson; was embroiled in robbery, kidnapping and murder cases which entrapped his life in a vicious circle of controversies.

He garnered much media attention for his involvement in crime; that polarized his fans. His murder trial is known as the 'trial of the century' and was covered by mainstream global media, worldwide.

OJ Simpson has been in a marital relationship with two beautiful women; and divorced them later. He is the proud father of four children. Currently, Simpson is single and enjoying a peaceful life in Las Vegas; away from media limelight.

Let's read further to know the detail of his marital life, relationship and affairs.

OJ Simpson is widely known for his record performances in NFL football, stints as commentator, spokesperson and movie star. In his life, Simpson married two women: Marguerite l. Whitley and Nicole Brown. After being released from prison; he is not dating anyone.

He met his first wife at Galileo High School in San Francisco. Though there is no exact information on the year they met; it is known that Al “ AC” Cowlings, the then-boyfriend of Marguerite had requested his help in settling their issue.

When Simpson talked with Marguerite, they fell for each other. Little did they know that their short discussion will blossom into love. Marguerite broke up with her then-boyfriend Cowlings at the age of 16.

When 19 years old Simpson was a freshman at USC, he decided to marry his girlfriend Marguerite on June 24, 1967. Marguerite was only 18 at the time of their marriage. 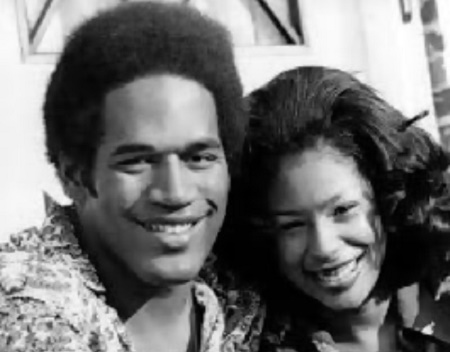 They tied the nuptial knot in the year 1967. Not much has been known about their marital life. Though, it is said that the couple enjoyed a fairly blissful marriage. They spent most of their married life in Amherst, New York, where he played for the Buffalo Bills.

Within few years of their marriage, problems crept into their marital life and they couldn't stay together. There was love lost between the former love-birds and they decided to divorce each other in 1978. Their divorce was finalized in 1979. 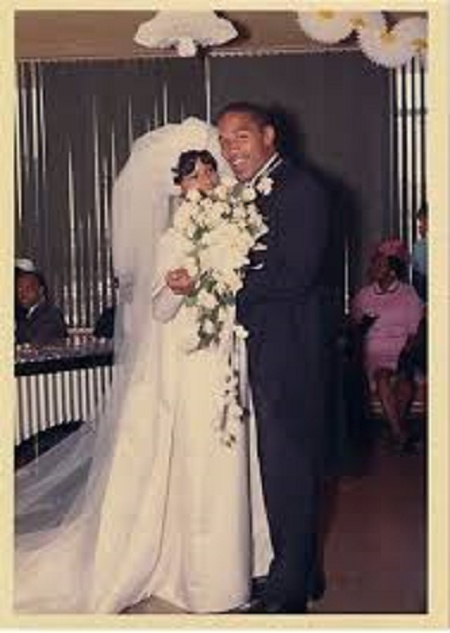 Only available photograph of Simpson and Whitley
Source: whosdatedwho

When Simpson started gaining popularity for his NFL skills, he started becoming egoistic, infidel and maniacal. In 1968 interview with Look magazine, Marguerite claimed that Simpson was being unfaithful in their marriage.

She stated in an interview,

"He was a beast. He was pretty horrible. If there were other fellows who wanted to talk to girls, he'd make them stay away. He'd been a terrible person, right on the edge of trouble."

Though Marguerite claimed that there wasn't physical altercation between her and Simpson; then LAPD officer Jim King had found evidence of physical abuse and altercation in their home in West Los Angeles. Simpson's fame and popularity led to their breakup.

He fathered three children with Marguerite: Arnelle l. Simpson (born in 1968), Jason L. Simpson (born in 1970 and Aaren Lashone Simpson (1977-1979). Aaren died in 1979 due to drowning in a family swimming pool in family's Rockingham estate, just before his second birthday. 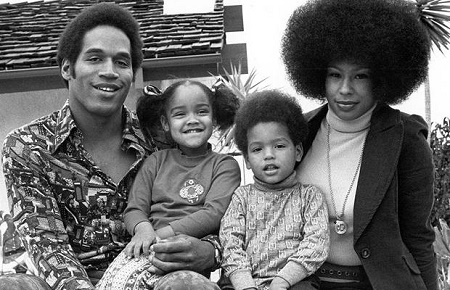 OJ Simpson with his first wife Marguerite and children
Source: In Touch Weekly

Before his marriage ended in divorce with Marguerite, Simpson was seeing Nicole Brown. Brown was working as a waitress in a restaurant. The pair fell in love and decided to tie the knot on February 2, 1985. 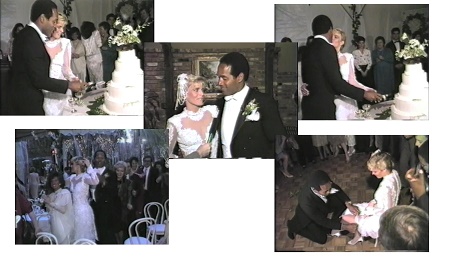 Snippets of a wedding between Oj Simpson and his second wife Nicole Brown
Source: iCollector

The couple had a stormy and problematic marital life. Their marriage lasted for seven years. Though, they became parents of two children: Sydney Brooke Simpson (born in 1985) and Justin Ryan (born in 1988); they couldn't find love in their relationship.

Nicole complained with her friend and family about his abusive behavior many times. Once, during a 1989 New Year's Eve celebration, Simpson threatened to kill her after their dispute. 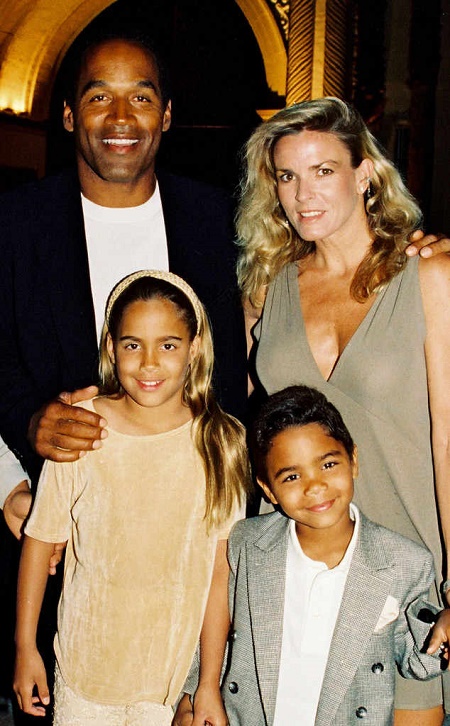 OJ Simpson and his wife Nicole Brown with their kids Sydney and Justin
Source: E! News

They were constantly arguing against each other. It is even reported that Nicole had to endure spousal abuse from Simpson, many a time. The police had to pay a visit to their home to solve their domestic disputes.

Simpson pled no contest to charges of 'spousal battery' and assault against his wife Nicole. After being unable to live together; they filed for divorce in 1992; citing 'irreconcilable differences'. They again tried to patch things up post-separation in 1993 but to no success.

It is widely claimed that their relationship was tumultuous since their marriage, but they were head over heels in love with each other; when they were dating.

Controversy and Trial of OJ Simpson

OJ Simpson came into media limelight when he was arrested and trialed for the double-murder of his former wife Nicole Brown and her friend Ronald 'Ron' Goldman on June 12, 1994. As per the report, Simpson murdered them in a cold blood in Nicole's home in Brentwood, Calfornia.

OJ Simpson during one of his trials
Source: Variety 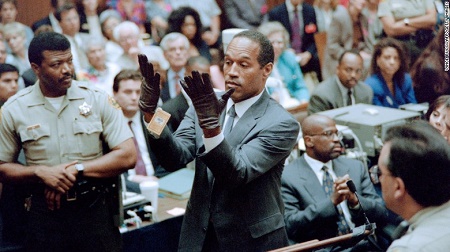 On October 3, 1995, OJ Simpson was acquitted of both charges and set free. Simpson wasn't jailed for his crime; and found not guilty by the jury as they didn't believe in DA evidence. The verdict was listened and/or watched by more than 100 million people, worldwide.

Though Simpson was acquitted of the charges, he was again trailed in a civil court in February 1997; wherein he was found complicit in double murder and urged to pay $ 33.5 million in damages to the Goldman families. There is a discrepancy about whether he paid the Goldman family or not.

In another case; Simpson was trialed for his involvement in 2007 armed robbery and kidnapping in Las Vegas Hotel. He was sentenced to 33 years in prison; with 9 years imprisonment without any bail. However, he was released from the prison in October 2017. 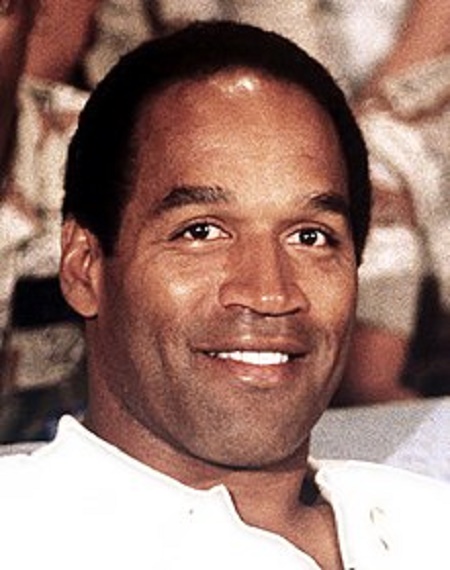 Source: Above the laws