Home Article Nelly Furtado and Demacio Castellon got married in 2008. Are they expecting a child?

Nelly Furtado and Demacio Castellon got married in 2008. Are they expecting a child? 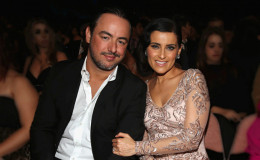 Nelly Furtado is a Canadian singer and songwriter. She is critically and commercially successfully. Like her professional career, she is successful in her personal life as well. She is married to Demacio Castellon, a Cuban-American sound engineer. The couple was married in 2008 and is living happily with their only child, from Furtado previous relationship. They spent together for 8 years and their relationship is going very well and there is no sign of divorce rumors yet. Let find out about their married life in detail.

Nelly Furtado is a Canadian singer and songwriter who is critically and commercially successful. She married Demacio Castellon, a Cuban-American sound engineer in 2008.

The couple is living happily with their only child, from Furtado's previous relationship. They are living a perfect life with no rumors of a divorce. Let find out about their married life in detail.

The couple tied the knot secretly without any relationship rumors.

In an interview, she said, ‘We got married and I love it’. She added,’it’s a nice phase of my life.’

Despite being married for 8 years, the pair’s bonding looks even stronger as husband and wife.  They look adorably perfect with each other.

None of them are involved in any extra-marital affair, so there is no chance for divorce in their relationship.

How did they meet?

They first met when she was recording her album ‘Loose Furtado’. They even worked together on her album. Slowly, they began dating and affair bloomed.

They dated for almost 2 years and decided to tie the knot.

As we already told you, the pair has a daughter, Nevis Gahunia from her previous relationship. She was born in 2003.

The pair doesn’t have any child from their marriage. However, as per the current rumors, they are expecting a child and Nelly is pregnant for the second time.

Well, this is surely a big news for both of them.

Prior to Castellon, She was in a relationship with DJ and producer, Jasper Gahunia.  The pair began dating since 2001 and broke up their long term relationship in 2005.

However, the pair never got married. When asked in an interview, she said,’ ‘I’m kind of modern. I don’t really live by society’s standards."

She further added, "Maybe in the next five years, I’ll get married, have more kids. One grandmother had eight kids, the other had 10. If I have that many kids, then I would need a hubby.” Now

Now, she must be very happy as she has found the love of her life and is living a life of her dream. We wish her all the best for her upcoming future.