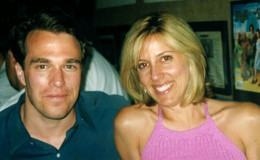 Known to ask tough and wise questions to many influential people in the United States. She is a fighter, a loving wife and a caring mother. She is none other than Alisyn Camerota.

If you have watched CNN's morning weekday program called 'New Day', then surely you must have seen Alisyn Camerota as well. She is a well-renowned and a hardworking employee of CNN.

Alisyn has been married to Tim Lewis since 2002 and the couple is still so much in love. They are now married for 16 years and there has never been any issue between them. The adorable pair has also been blessed with three children. let us find out more about the powerhouse couple.

She married her husband, Tim Lewis in 2002 after dating for several years. Similarly, Alisyn gave birth to fraternal twin (daughters) in 2005.

They named their twin daughters Alessandra Lewis and Francesca Lewis. She enjoyed motherhood yet again in 2007 when she gave birth to a boy and named him Nathaniel Lewis.

She once mentioned about her friend Maria through her Instagram account who told her an advice that " Find someone who feeds your soul" and that advice changed her life because it seems that Alisyn has found that someone who feeds her soul.

"Find someone who feeds your soul." Meet Maria Villalobos, my relationship guru and the person who changed my life with that advice. She gave me the wisdom on love I desperately needed when I was 26 years old. See the full story through the link on my FB page! #MyLifeChanger

Alisyn declared infertile. How did she cope up with that situation ?

In 2010, Alisyn appeared on 'The Today Show' where she told the world about her infertility issues. Alisyn told that she always has irregular cycles and yet she avoided those symptoms for 20 years.

At the age of 35 when she was ready to conceive then only, she knew about her infertility issue.

She stated in an interview "Like a lot of women I thought, When it's time, I guess I'll just have a baby. We are not well educated about fertility. I had been ignoring symptoms for the better part of 20 years. I always had irregular cycles, but I dismissed it—I didn't know what a huge part that would play in my fertility."

Tim came as a guardian angle for Alisyn

However, luckily for Alisyn, her husband was always there for her. He was very supportive at that time and he was even ready for an adoption.

Alisyn stated, "Luckily, my husband was supportive and wonderful through the whole process. I thought, This will never work, we will never have a child, I will be deprived of this thing that is so important to me—a family".

Tim seems to be a very loving and caring husband to Alisyn and the couple is also happy with their married life.