Known as a proud Republican, TV news reporter Jack Posobiec is apologetically himself. Posobiec has also bagged himself a wife who shares the same beliefs and ideas as him.

The political commentator Jack Posobiec couldn't be blessed to share his life with his longterm-girlfriend turned wife, Tanya Tay who is equally as religious as him. The devout Christian and Tanya began dating in late 2015 after they met through a Bible study program class and entered a courtship for two years.

And, as they shared so much in common between each other, Posobiec realized Tanya was the one he wanted to spend the rest of his life with. So, he didn't hesitate to pop the question. Tanya happily said 'Yes'.

On 5th November 2017, Posobiec and his fiancee turned wife walked down the aisle with the presence of close friends and family in an outdoor wedding ceremony.

Both the groom and bride matched their wedding attire for their big day. Posobiec, a former navy veteran, wore his white uniform as Tay matched her groom in a white sleeveless gown. The two also shared their beautiful wedding snaps on Instagram.

Jack Posobiec & Tanya Tay Are Blessed With A Son

As of July 2020 since November 2017, Jack Posobiec and his beloved wife Tanya Tay have been happily married for nearly three years. And, over the years, with the grace of God, the couple has been gifted with a child too.

Posobiec and his wife are parents to a child, a son whom they welcomed in May 2018. Jack and Tanya are over the moon with the presence of their little one in their life. Not to mention, the happy father and mother often share their son's adorable snaps on social media too. 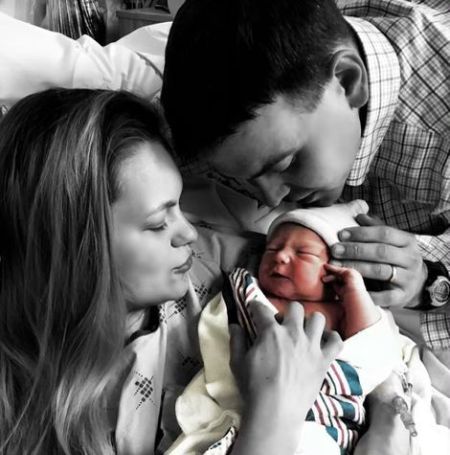 In addition, Posobiec maintains a great life as a working father while currently being involved with One America News Network (OANN) as a notorious political commentator who openly shows his support from Donald Trump.

The Philadelphia native works alongside OANN co-worker Chloe Salsameda and Stephanie Myers. Previously, he was a navy and worked for the Office of Naval Intelligence, United States Chamber of Commerce in China, and WPHT.

Stay tuned at MarriedWiki for more Biography and News.