Home Article R&B Singer Jason Derulo and his bikini model girlfriend Daphne Joybroke up. When will he marry?

R&B Singer Jason Derulo and his bikini model girlfriend Daphne Joybroke up. When will he marry? 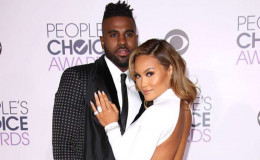 R&B Singer Jason Derulo has ended his relationship with bikini model girlfriend Daphne Joy. The 26-year-old singer had been dating the 29-year-old bikini model for over seven months.

In January 2016, on the People’s Choice Awards red carpet the duo made their first public appearance as a couple in Los Angeles.

The couple looked loved-up with Joy in a cut-out white dress while Jason wore a patterned black suit who would have thought that their relationship will only last for few months.

Jason Derulo and Daphne Joy as a couple

The ‘Want to Want Me’ singer started dating Joy after meeting in the UK late last year.

They made their relation public at the People’s Choice Awards in Los Angeles when they entered red carpet as a couple.

While describing his new girlfriend Jason said that “I’m just enjoying life. I don’t want to talk too much about, but I’m definitely enjoying life right now.”

In March 2016, they even made headlines after spotted vacationing together on the beaches of Punta Mita, Mexico.

The two were seen getting cozy and affectionate in Mexico. As usual, Daphne was looking stunning and sexy as she showed off her bikini body while walking down the beach with her younger beau Jason.

The pair was all over each other; kissing for the cameras, holding hands, grabbing each other. However, currently, two of them are no more together.

Daphne Joy and Jason Derulo are no longer together

Even though the pair seemed very happy together the love between the duos started fading like the sunset and finally, the Talk Dirty singer and Filipino model broke up.

Few months earlier Joy did gave some of the hints to her fans through her social media accounts indicating the problems in her relationship.

In one of the tweets, she wrote ‘An #Aquarius female not interested in dwelling on the past or even the present, They look forward,”. Similarly, in another tweet, Joy wrote: “#Aquarius’ are loyal.” These tweets clearly indicate that she and boyfriend Jason were definitely having problems.

After the breakup announcement R&B singer was seen at a hotel in Miami with several hot women in bikinis and was also on the red carpet for an iHeart Radio event seems like he has alreadymoved on.

Prior to Joy, Jason was in a relationship with Jordin Sparks. The former couple dated for about three years before they mutually decided to part ways.

According to Jason, the reason behind their break up was he being pressurized for marriage. He said, “There were a lot of pressures of marriage. There was a lot of arguing and stuff like that just weighed on our relationship over time.”

His nervousness towards marriage easily describes that Jason has not got any plans to get married anytime sooner.

Since then, Jordin has been in a relationship with rapper Sage the Gemini and they seem pretty serious about their relationship.

Describing her relationship, the American Idol winner said, “I could see marriage, but we haven’t really planned anything. He does call me his wife, though.”

Gorgeous and sexy Daphne Joy has also been in a relationship with one of the most popular rappers 50 Cent.

Even though the couple dated for less than a year there is one person who will always link them together and he is none other than their son Sire Jackson.

Joy gave birth to her first baby on 1 September  2012 and he is surely a star kid as he modeled for Kidz Safe, a headphone brand for kids only at the age of two earning $700,000 through his contract.

Even though 50 Cent and Joy are no longer together they have been linked up together several times and according to some sources, 50 cent is one of the reasons behind the breakup of Joy and Jason however, 50 Cent has never preferred to talk about that case.