Radio host Erik Kuselias and Golfer Holly Sonders married life. Do they have any children.? 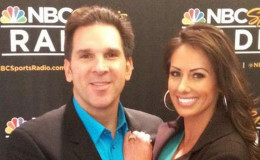 The relationship of Erik Kuselias and Holly Sonders had reached to the extent of split but now everything is going well between them.

Recently, the married life of cutest couple Erik Kuselias and golfer Holly Sonders is facing ups and downs. Their relationship has been a roller coaster ride due to the sexually flirting behavior of Erik.

The radio host Erik Kuselias married golfer Holly Sonders in May 2012. It was shocking for public when such a hottie of 26 decided to marry a man who was in his forties.

The couple dated for a while and officially got hitched on 2012. Erik and Holly, have also worked together on Morning Drive. Currently, they have no children and are focusing on their career.

Erik is currently working as a co-host of the program Pro Football Talk. Whereas Holly Sonders is a golf specialist and a reporter at FOX Sports with the seducing body like a model and is recognized as one of the sexiest ladies in the sports world.

Both of them has always kept their personal life away from the limelight. However, recently, the news about the couple's divorce hit the tabloids but the news has not been confirmed yet.

Having no children despites being married for so  many years also has raised questions about their married life.

Erik has owned a bad reputation in the sports world as 'the biggest douchebag in the place'. He was known for sexually flirting his co-workers.

When Holly found about this behavior of her husband, she went through checking and inspection. His relationship with ESPN co-worker was also revealed in front of her.

Reportedly Erik was suspended by ESPN  for his behavior. The case became very scandalous for ESPN in the year 2009.

It was at a party where Erik and Holly both were present and he tried to flirt with ESPN co-worker Stephaine Bell saying, "I would like to fuck with you' which made Holly go mad."

Are they getting a divorce?

Since that case, questions have been raised on their married life, whether they are divorced or not but reports  say that the couple is currently living together.

As they want to give first priority to a career they are planning to have children for a while. Seems like whatever goes wrong between them, they will work things out.It is true that they did split for some time, but divorce has been never a choice.

It is true that they did split for some time, but divorce has been never a choice.

Being in the field of limelights and media, it is probably hard for them to keep their relationship secrets however, it is the bonding between the duo which has never let their relation fall apart in front of the public. We don't want them to split, do we?

The fact is, only the duo knows about their relationship status and what has been going on between them recently and no prediction can be made on their married life until and unless they announce it.