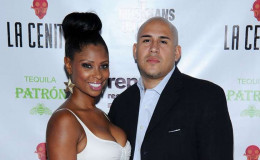 Being a parent is never easy. Being a parent means you become responsible for someone else’s life, a child’s life and taking responsibility of a child while you are a child is definitely rocket science.

However, somehow, Diamond Strawberry managed to keep up the ups and downs of young parenthood.

Diamond Strawberry rose to fame from VH1 reality show 'Love & Hip Hop'. She has also been a huge part of the controversy as she has been accused of being a bad mom by the internet.

In an interview, Diamond Strawberry mentioned that she was eighteen years old when she got pregnant and that it was definitely not planned.

She said that she was dumb enough to think that she could hide her pregnancy so hid her prenatal in her purse which her mother eventually found out.

Her mother scheduled an appointment to get her pregnancy terminated but Diamond refused to it.

You May Like: Cardi B Gives Birth To A Baby Girl With Boyfriend Offset-Gives Unusual Name To The Newborn

Diamond was strong enough to take charge of what had happened and believe that she was woman enough to raise a child.

Diamond Strawberry’s Relationship With Her Daughter

Diamond said that it was all fun and games before her pregnancy with her daughter and that she and her child's father were in love but when their daughter was born, the tables took their turn.

Once their daughter MyLisa was born, her then-boyfriend bailed out by saying that the whole family thing was not his cup of tea and they haven’t been on good terms since then.

However, the daddy still visits his daughter and someone managed to be a good father.

Internet Trashed Diamond Strawberry And Called Her A Bad Mom

Diamond Strawberry had earned the name of a ‘bad mom’ when the internet found out about her calling her daughter a dog.

She often referred to her daughter like a dog whenever her boyfriend Cisco used to call her as she did not want him to know about her daughter.

So whenever Cisco called and there was noise in the background, she’d say it was her dog when it would be her daughter.

People started taking this statement quite serious and began to bash Diamond for being a careless mom.

Eventually, Diamond came clean about the whole controversy and said that if there is one thing she regretted, it is calling her daughter a dog.

In her defense, she said that there indeed was a dog in the background which basically made the whole story a white lie.

Also Read: Model Erica Mena recently revealed her new boyfriend in her Instagram account: Once was engaged to rapper Bow Wow: Confession of being a bisexual

She also said that anybody who knows her knows that her daughter is her world and that she is a really good mom.

She also said that she kept her daughter hidden from her boyfriend because she wanted to get back at him for cheating on her and lying about having a child.

Diamond Strawberry’s On And Off Relationship With Cisco Rosado

Cisco and Diamond have been in an on and off relationship for quite some time but Cisco has not been completely clear about the woman he actually wants.

Cisco shares a baby with Tasha with whom he cheated on Diamond.

Obviously, the two had reasons but when we look at it, hiding their respective children from each other seems like a big deal.

However, Diamond Strawberry was very young when she had her daughter and we all make mistakes at that age. So did Diamond.

The least internet can do is forgive her for her mistakes. After all, nobody could ever love a child better than her mother.

Well, things are still a mystery if Strawberry and Cisco are still in a romantic relationship or have broken apart.

Let the stars reveal about their current relationship status soon!

Stay on marriedwiki.com for some updates!