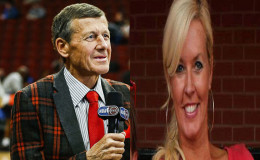 Craig Sager, Sr. (born June 29, 1951) is an American sideline reporter for TNT and TBS. Sager is a graduate of Northwestern University. He has previously covered sports for CBS and CNN.

From wearing vibrant and colorful suits while reporting TBS and TNT sports to battling life-threatening health problem: bone marrow cancer, Craig Sager has experienced all the colors of life. With loving and a supporting family by his side, along with his tons of fans and well-wishers, this man has truly earned everlasting respect and honor.

The lively and enthusiastic sportscaster has inspired players, coaches and fans with his "never give up" attitude during his painful two-and-a-half year battle with cancer and his inspiration to win this fight lies within his ever loving and supporting wife Stacy Sager and their two adorable children.

Now, everyone wants to know how the journey of this inspiring couple began and the story behind their extraordinary love and commitment. So, let's find out everything you need to know.

The magnificent couple, Craig, and Stacy got married in the year 2000. They met each other on one of the Bulls game where Craig was the broadcaster and Stacy was the Luvabulls Chicago Bulls Dancer.

After dating for some time, Craig finally proposed to his sweetheart, Stacy in the World Series Baseball game, in the most romantic way.

Eventually, the couple tied the knot in the summer of 2000 and became officially wedded, husband and wife.

Before marrying Stacy, Craig was married to his first wife and together they have three kids. Out of them, the eldest son, Craig Sager Jr. is the popular son of Craig Sr. as he was the one who announced his father's cancer diagnosis.

Also, in his father's tribute, Craig Jr. did an interview with San Antonio Spurs coach, Gregg Popovich, in the last season of Play Offs, which led Craig Sager Jr. all teary and emotional when he was in hospital receiving his third bone marrow transplant.

During an interview with CNN from his hospital bed, Craig with much emotion shared that Stacy was his "ultimate dream girl" and the woman who never gave up on him and supported him through his cancer. She was the sole source of inspiration for him in his entire life. Also, Craig's wife Stacy further added:

She was the sole source of inspiration for him in his entire life. Also, Craig's wife Stacy further added:

“Craig didn’t know the scope of his disease. He didn’t want to hear it because he’s such a positive person.”

Hence, this powerhouse and the incredible duo really have stick together in good times and in bad times, through sickness and sorrows, winning all the battles of hardships and struggles.

For such an amazing couple, there's no chance of them getting divorced or having an affair.

Stacy and Craig have been blessed with two beautiful kid; a son named Ryan-8 and a daughter named Riley-10. This family of four is truly perfect and wonderful and they are living happily together.

Veteran broadcaster Craig Sr. was diagnosed with leukemia two years back in 2014 when his son, Craig Jr. tweeted about the sad news.

My Dad's 3-4-week acute leukemia treatment starts tmrw.Be thinking of him & let's get him back on the sidelines soon pic.twitter.com/5CNI55p2Gx

After the news, Sager, who has been working for the past 20 years as the NBA games sideline reporter, missed the entire NBA Playoffs as he has to undergo long sessions of bone marrow transplants and was permanently admitted to the hospital. Craig's eldest son, Craig Jr. took series of tests to check if he could be a fit for the bone marrow transplant for his father and fortunately, it resulted as a perfect match.

On an interview with Bleacher Report Craig Jr happily told the sources that he was very happy that he was the one to donate his bone marrow to his dad and how amazing the feeling was that he could not even describe.

1 mile of laps & all smiles the day before the transplant. You did your part chemo. Now it's my turn ??#GetWellSager pic.twitter.com/MIm4kt1Ez2

After successful treatment for the past 11 months, Craig has finally become a free man, out from the hospital and all those hours of long treatment and he no longer has to see the sad and worried faces of his little kids and wife.

He returned home all happy and healthy on August 15, 2016. When asked how he missed everything, Craig replied stating:

"I probably should have been dead, But this is the truth: I never had a bad day. Never. Never said, ‘Why me?’"

His fans all around the world supported him and sent him a get well soon messages and tweets and he also composed a "thank you" video to all his followers.

As for now, he's back in the game, doing what he does best in his colorful suits and charming personality.

Well, we wish Craig for his well-being and speedy recovery and hope that he stays healthy and happy with his family for the rest of his life.