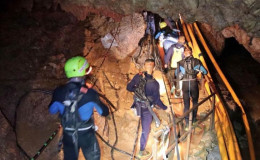 A rescue operation to release 12 schoolboys and their football coach, who have been trapped inside of a cave in Thailand, has started. The rescue of the children and their coach from the flooded cave is expected to terminate by tonight (Sunday, 8th July). The rescue commander announced the team of 18 international divers started their 'extremely dangerous operation' at 10 am after the anxious family members of the trapped were informed.

A rescue operation to release 12 schoolboys and their football coach, who have been trapped inside of a cave in Thailand, has started. The first child will be rescued by Sunday night while the whole rescue is expected to take around two days.

The rescue commander announced the team of 18 international divers started their 'extremely dangerous operation' at 10 am after the anxious family members of the trapped were informed. 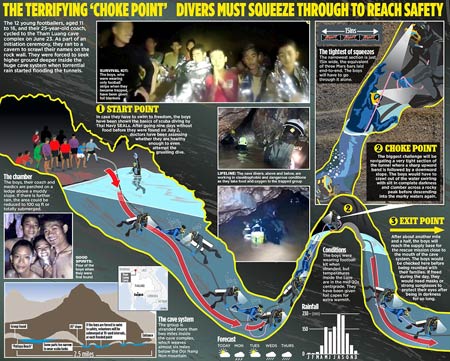 Map of a Thailand cave where twelve kids and a football coach have been trapped
Source: Daily Mail

The crew of 13 foreign and five Thai Navy SEALs will extricate the boys one at a time through the flooded tunnels. The rescue mission chief Narongsak Osottanakorn told the rescue might take two to three days to release all 13 people off the tunnel. Narongsak said,

Today is D-Day. We are 100% ready. There's a storm coming and if we wait for the rains, conditions won't be as perfect as they are now.

We sent in a medic yesterday, they are mentally and physically ready; we'll never be as ready as we are today. We ask everyone to pray and cheer for our success

Two divers will accompany a boy through the perilous 4km journey of murky waters. The rescuers are understood to be able to walk most of the path after they drained the water by 1 foot last night. 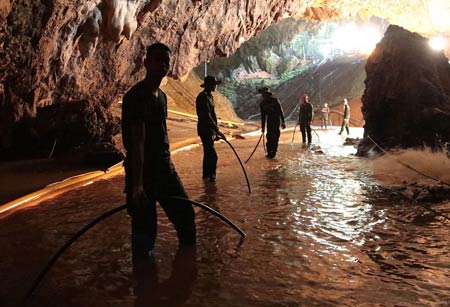 Thai rescue team inside a flooded cave where 12 boys and their football coach have been trapped for weeks
Source: Daily Mail

The youngsters will be taken to the Chiang Rai Prachanukroh hospital, which is at 57km from the cave, straight after taking out of the tunnel.

Twelve boys of ages between 11 and 16 and their 25-year-old coach were trapped under the Tham Luang cave on June 23 after a sudden rain flood blocked the exit. Over 1,000 people and at least seven foreign governments searched for the missing group for days before a pair of British divers found all 13 members alive and in stable health. 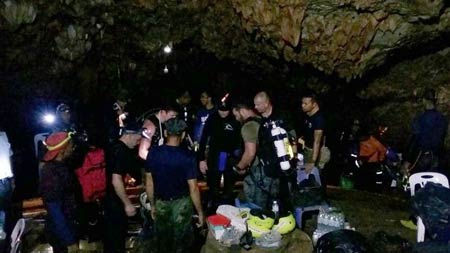 A pair of British divers were among the divers to find the missing boys and their coach
Source: Mirror

A national park ranger informed the officials after he found their shoes and bikes near the entrance to the cave. The Thai Navy Seals swam into the cave before finding them through the murky cave.