Rick Astley and his Wife Lene Bausager married since 2003. 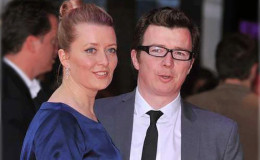 An English singer and radio personality, Richard Paul ‘Rick’ Astley is best known for his 1987 song, ‘Never Gonna Give You Up’, which was a No.1 hit in 25 countries. Like his professional life, he is successful in his personal life as well.

An English singer and radio personality, Richard Paul ‘Rick’ Astley is best known for his 1987 song, ‘Never Gonna Give You Up’, which was a No.1 hit in 25 countries. Like his professional life, he is successful in his personal life as well.

Astley is a married man. Recently, he revealed about his marriage. He got married to Lene Bausager after 15 years of relationship. It sounds weird, isn’t it?? How can a pair be in a relationship for 15 years with getting married? Let us find out the couple’s relationship and married Life.

Rick Astley tied the knot to Lene Bausager, Danish Film Producer in 2003. Now, the couple is officially husband and wife after spending 25 years without marriage.

Recently, Veteran singer has revealed about his marriage with his Long-term partner. It seems he looked happy to share all his 27 years of memories with his lovely wife Bausager.

According to the report, Astley said ‘It was very, very casual. We had been engaged for 15 years but we are both very busy. We just didn’t find a date in the diary.’

Thanks to the couple’s only daughter, Emilie, born in 1992. She encourages the couple to get married.  Emile was visiting south London to her father and mother because she lives in Denmark.

During the time the whole family was sitting together, she asked whether the couple will get married or not? Then Astley replied let’s do it. The couple just got married in the register office in a secret way in the presence of their daughter.

The Oscar-nominated film producer Lene Bausager have teamed up with Simon Moran to co-manage singer Rick Astley. Recently, Astley had a deal with global representation with WME in which Marc Geiger represent him for US and David Levy for the UK and other nations.

An umbrella company has been partnered by Bausager and Astley to unveiling the pair’s creative plans. Last year, also the singer has been benefitted by Lene and Simon with their support.

SJM concert managing director Bausager and Simon will work along with Marc and David as one team. Marc and David were so instrumental in the incredible success of 50”.

In early 2016, veteran singer’s 50 album became his first album that is no.1 throughout in the UK almost 30 years with achieving Gold certification status.