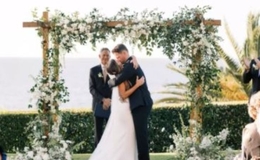 Ryan Griffin is married to his long-time girlfriend turned wife, Marissa Boyd. The couple is now going for a big honeymoon, and people want to know where they are heading. Let's find out!

God took his time when he created Ryan Griffin, notable for his on-field performance. Speaking of which,  a native of Santa Monica, played college football at Tulane.

But, is the charming man still together with his girlfriend, Marissa Boyd?" We hate to break it to your ladies, but Ryan is officially off the market as he recently exchanged the vows with his partner.

Marriage is realizing that you have met your perfect match," and Ryan has already found his ideal match. The NFL star and his wife seem to share a strong bond. 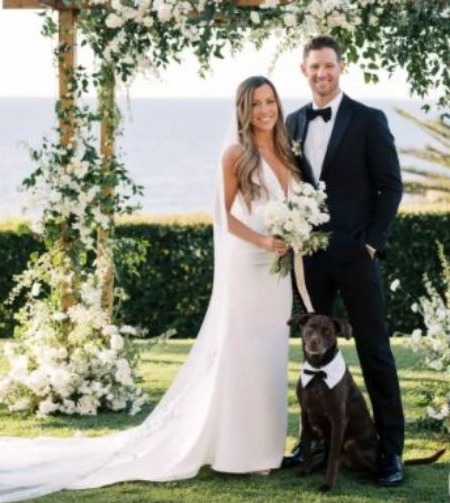 Well, Ryan is happily married to his loving wife. But life is not a fairy tale, and the duo did have ups and downs in their relationship, yet the two never had a breakup.

On February 25, 2022, Buccaneers Quarterback said "I do" to his lady love after four years of relationship. The holy ceremony took place at the Bel-Air-Bay Club in Los Angeles.

The duo got engaged in October 2020. Many of Griffin and Marissa's closest NFL friends, including Cameron Brate, Blaine Gabbert, O.J Howard, and their adorable pup, were in attendance.

Ryan Griffin wanted his marriage to be lavish, which turned out to be extravagant. The athlete couldn't hold back tears seeing his sweetheart looking beautiful while walking down the aisle. 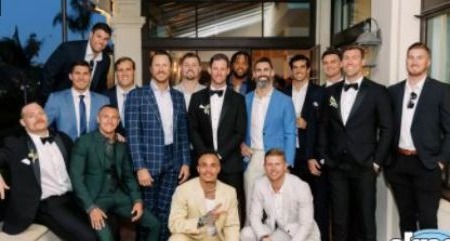 Ryan Griffin was posing with NFL mates for a photo after his wedding. SOURCE: Jenny Quicksall

To add up, the bride wore a form-fitting gown and cathedral-length veil for her big day. At the same time, Ryan was stunned in a classic black tuxedo.

Further, Kelly Patrice planned the wedding and photographer Jenny Quicksall and Luxury Lifestyle Studio captured every moment of the ceremony.

Check out the wedding video of Ryan Griffin and Marissa Boyd.

After their moving ceremony, the newlyweds celebrated at a reception featuring florals and a photobooth with D.J Jonathan Rosales spinning the tunes.

Next up, Boyd and Griffin planned Hawaii and Costa Rica for their much-deserved relaxation and honeymoon as per People Magazine.

Happy Conjugal Life to the Couple

Both of the newlywed pair were looking gorgeous together. Talk about the match made in heaven! Not to mention, Boyd chronicled the day leading up to their wedding for months. 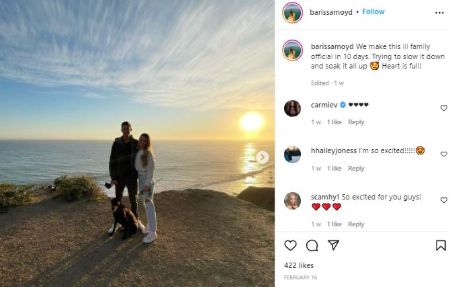 Ryan Griffin and Marissa Boyd have been together since 2018. SOURCE: Instagram(@barissamoyd)

In February 2022, she posted on Instagram, " We make this lil family official in 10 days. Trying to slow it down and soak it all up. Heart is full!"

" I'm feeling like I'm on cloud nine," said Marissa, who shared a good portion on her big day via Instagram.