Home Article Setting An Example For The Same-Sex Marriage Erin Phillips and Tracy Gahan. Details About Their Relationship And Children.

Setting An Example For The Same-Sex Marriage Erin Phillips and Tracy Gahan. Details About Their Relationship And Children.

There are no limits to your happiness when you find someone to make your life partner. Former Australian professional basketball player Erinn Phillips and her wife Tracy Gahan have felt the experience and have set an example for the same-sex marriage.

Are you interested in the married life of Phillips and Gahan? We have all details here.

The 32-year-old Australian rules footballer for Adelaide Erin Phillips is currently living a blissful married life with her former Adelaide Lightning teammate Tracy Gahan. The couple first met around eight years ago while playing for the Adelaide Lightning.

The couple eventually tied the knot in the United States after dating for some time. Currently, they are blessed with a twin. Phillips’ wife, Gahan gave birth to twins, daughter Brooklyn and son Blake, in November 2016. 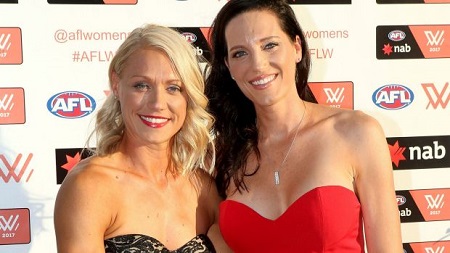 “The best thing that’s ever happened in my life. They’ve been the best thing and the hardest thing in the world, I think I describe it as. The biggest challenge for me probably was that with basketball and my career I was always on this schedule, setting goals and having a routine every day."

“Now, after having kids, that’s gone completely out the window. “I’m just kind of learning patience and to expect the unexpected. But it’s been the best thing in my life, that’s for sure."

Phillips and Grahan are also quite supportive of each other. Phillips also thanked her wife Grahan for her support as she won the AFLW Best and Fairest award in early 2017.

"Tracy, we've been through some amazing things. Obviously having kids is the first."

The proud parent of two, Phillips and Grahan, are loving and caring mothers.

The couple also celebrated the 1st birthday of their kids together in November 2017; Phillips immediately shared on her Instagram expressing her love:

"Today Brooklyn and Blake turned 1. I can't believe where the time went!! I have loved being a Mum more than I could have ever imagined. Happy 1st Birthday our beautiful miracles"

The couple also loves spending time with their children. They also love visiting several new places with their kids.

Erin Phillips: Retirement from basketball career to focus on football

After nine years playing in the WNBA, Phillips officially announced her retirement in May 2017 as she wanted to spend more time with her family and also to focus on her football career. 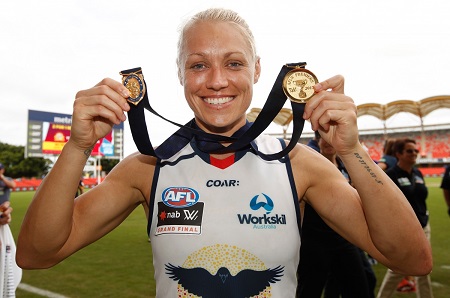 Erin Phillips retired from basketball career and to focus on football
Source: The New Daily

Phillips said in a statement in May 2017:

“Most importantly, this gives me the first opportunity since last October to spend dedicated time with my young family at our home in Dallas,”

“After nine years, two titles and some great memories playing in the WNBA, I’ve now got the opportunity to start the next stage of my professional career in sport."

Currently, the gold medalist at the 2006 FIBA World Championship for Women is focusing on her professional football career and playing for the Adelaide Crows in the AFL Women's competition. 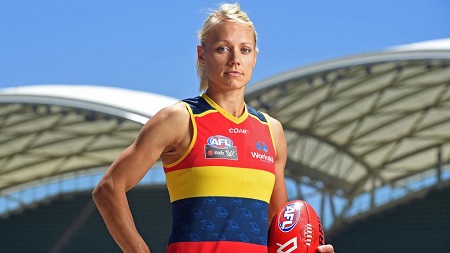