Home Article Sarah Spain and Brad Zibung got married in 2016. See their relationship.

Sarah Spain and Brad Zibung got married in 2016. See their relationship. 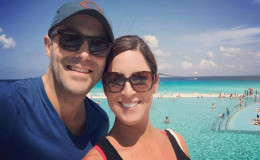 An espnW.com Correspondent, Radio Host and Sports Center reporter Sarah Spain is a Prominent Figure as a Sports correspondent. Everyone is not so blessed to get married to their love of life while only a few lucky People gets a chance to live their Life with their loved ones forever.

An espnW.com Correspondent, Radio Host and Sports Center reporter Sarah Spain is a Prominent Figure as a Sports correspondent. Everyone is not so blessed to get married to the love of their life while only a few lucky People gets a chance to live with their loved ones forever.

Similarly, Sarah Spain and Brad Zibung are one of those lucky people who turned their relationship into a wonderful marriage. How they are living their married Life. Let’s find out.

Sarah Spain tied a knot to her longtime boyfriend, Brad Zibung in front of more than 300 guests including family and friend on May 29, 2016, in CHICAGO, IL.

Both husband and wife believed that they’re Perfect match for each other in the sports sector.  Brad is the inventor of the iconic sports site called The Heckler

After dating each other for almost seven years, they turned their relationship in a marital relationship. Recently, they got married and are busy in visiting new places.

Well, Sarah and Brad first met in 2008 at a charity bowling event, hosted by Brent Seabrook, a Blackhawks defenseman.

In 2009, they started dating each other. Actually, it wasn’t a date.  Spain was asked to a date by Zibung via social Networking site Facebook.

TBT to the best weekend ever, when I married the best guy in the whole world. #TheLuckiest

At that time, they both were unknown to each other as they had a different Facebook identity. During that time, For Sarah, Zibung was just someone who worked at “The Heckler.”

Slowly they started to know and understand each other and since 2011, they began to live together as their relationship blossomed with time and finally they are together forever.

Spain has worked for several other News agencies Like Fox Sports Net and ChicagoNow.com before getting into ESPN.

She was also the frequent guest-host of WGN's radio show called ChicagoNow Radio. She did some work as a sideline reporter for the Big Ten Network and hosted the Coors Light, a Fantasy Players Minute Show.

Similarly, Spain was one of the original co-hosts members of the WGN-TV show "Chicago's Best’, alongside Ted Brunson and Brittney Payton.

In 2010, she joined ESPN 1000 in Chicago and signed on as a writer for espnW.com in October. On 2015, it was announced ESPN launched a new radio show called Spain & Prim alongside Spain and anchor Prim as the co-hosts.

Till this date, Spain has appeared on a variety of ESPN's  television shows including ‘His & Hers’, ‘Olbermann’, ‘Mike & Mike’, ‘First Take’, ‘The Sports Reporters’.

She is a very hard working and passionate individual and she is surely an inspiration for all of us.