Home Article Scott Pelley and Jane Boone have been married since 1983. Know about their family and children

Scott Pelley and Jane Boone have been married since 1983. Know about their family and children 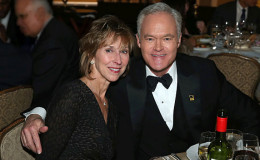 A brave, honest and willing to give news even in the extreme of circumstances, Scott Cameron Pelley is the best journalist we have seen. Let us take a look at his personal life.

An American Journalist who is currently serving as an anchor and managing editor of the CBS Evening News, and is also a correspondent for the CBS News magazine, Scott Cameron Pelley has dedicated his entire life to journalism.

Normally, most of the celebrities do not have a stable relationship or marriage, but Scott has been married to Jane Boone since 1983 and the couple is still very much in love. Scott and Jane met each other in SMU Campus for the first time and eventually fell in love. Let us find out more about this adorable pair.

Jane Boone is a former Channel 5 reporter. They both met in SMU campus in Dallas for the first time. The couple married in 1983 and has stuck with each other ever since.

Scott said, “Jane and I lived here for 20 years. We met here, and we were married here on the SMU campus. We had our children here.”

Two beautiful children of the couple

The couple has been blessed with two children; a son and a daughter. Their son's name is Reece Pelley and daughter's name is Blair Pelley.

The whole family loves to travel all the time, and they have been to pretty fascinating places all around the globe. Scott

Scott said, "Having our children travel has always been my wife's priority and one Jane (Boone Pelley) has worked very hard to make happen."

Family was always the first priority for Scott

Scott has always put his family in his first priority list. The whole family used to travel together on Scott's show called "60 Minutes" adventure.

He also recalls taking his son to Antarctica when his son was eight years old. He said,"It was one of the greatest father-son memories that I have of the two of us. My little boy is now 22 years old and 6-foot-6, but I still remember him as a little guy."

Most of the celebrities do not have this kind of life. But due to Scott and Jane's hard work towards raising a good family, it has made them stick to each other for a long time.

Scott is a very brave reporter who would do anything to bring justice to the society. During the reporting of Guatemalan refugees living in the remote jungles of Mexico, his reporting caught an eye of executives of CBS news.

He has also reported on many important incidents like 1993 World Trade Center Bombings, the Branch Davidian Siege and the 1995 bombing in Oklahoma City.

Well, we can surely say that he is not only a loving husband and a father but also a dedicated and hardworking employee and we will always hope for his happiness and success.